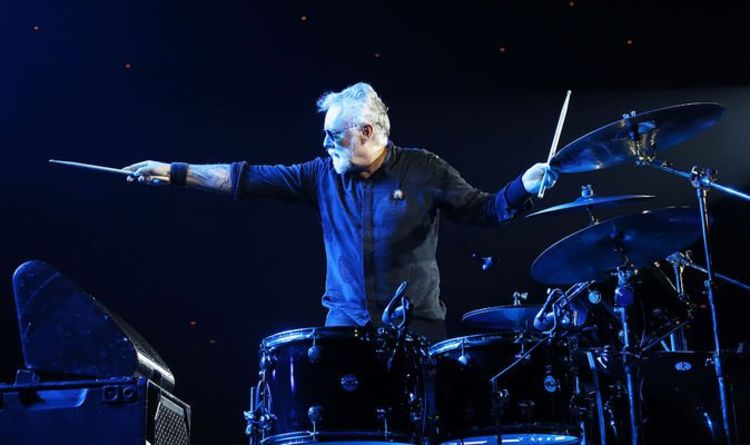 He’s been Queen’s drummer for over 50 years and next year Roger Taylor will be joining Brian May and Adam Lambert on their UK and European tour. In the meantime, the 72-year-old has kept himself busy writing a new solo album in Outsider, which he took on tour this autumn. In this week’s episode of Queen The Greatest, the focus is on Roger’s drum sound, but the star has admitted there’s an aspect of his playing that he hasn’t always looked forward to during performances.

The new video shared archive footage of Roger saying why he believes his drum solo should be played sparingly and not outstay its welcome at live Queen shows.

The drummer said: “Drums solos were a cliché. In the early seventies, they were a cliché and it was just something that one did.

“And I never really honestly enjoyed actual solos, I always really preferred playing as part of the ensemble, part of the band and part of the song, really.”

He said how while it’s “all very nice, they’re just showing off really aren’t they?”

READ MORE: The Beatles: George Harrison ‘would NOT’ rejoin a band with McCartney

Roger shared how this was especially the case when playing to a lot of fans at really big concerts.

The rock legend continued: “If I did a solo and I would suddenly look down and notice people going out for a hot dog, I’d never want to do it again because you knew that you were boring people.”

The latest episode Queen the Greatest also sees Brian fondly remembering the early days of his bandmate on the drums.

The guitarist said: “I remember him bringing his kit in very carefully, and he set it all up on its stands. And then he started to do something very curious. He was like making little tapping noises and turning knobs, and I went ‘What are you doing?’”

In last week’s episode of Queen the Greatest, Brian said how he had to work hard to stop his guitar solo from becoming too repetitive.

He said: “I had to be very careful because you can fall into a trap. If something works great and you get a good response, the tendency is to keep doing it, but it doesn’t work that way.

“You’ve got to, sort of, take it to its natural peak and then let it go and try something else because things get old. Y’know, you have to keep yourself fresh and the audience fresh.”

Queen and Adam Lambert UK and European tour tickets can be purchased here.