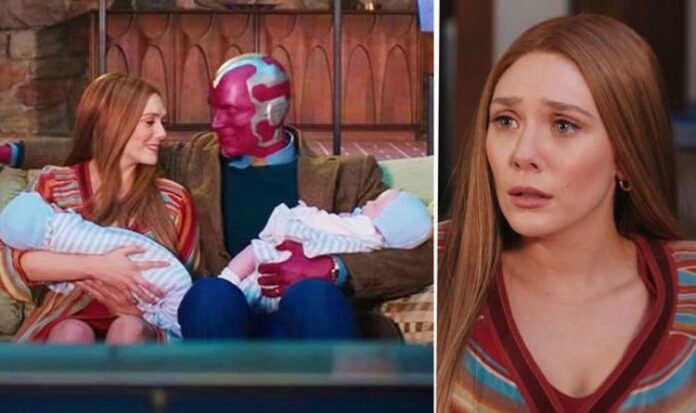 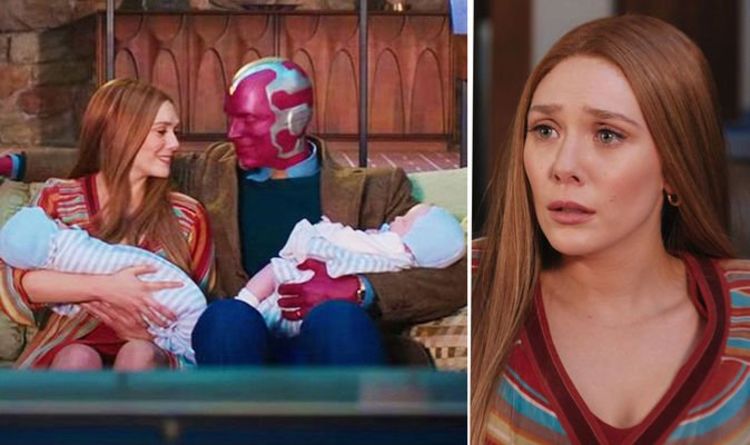 Everyone is frantically trying to work out what is happening on the new Disney Plus show. Not only is Vision back and alive when he was shown being destroyed by Thanos in Avengers: Infinity War, he is also the new proud father to twins with his lovely wife. Their suburban dream seems complete, except almost everyone in the show now appears to doubt it – including Wanda and Vision themselves. What is going on?

By now, most of us are thinking that Wanda has used her extraordinary powers to create some sort of alternate reality.

Devastated with grief over the loss of her partner, she has built a fantasy sitcom world where they can live in bliss – and ignorance or reality.

However, reality is starting to break back through, just as Rwanda appears to become pregnant and deliver twin boys in the space of a couple of hours – or one sitcom episode.

Fans have been waiting for this – and know that in the comics Wanda and Vision are parents to the twins Billy and Tommy Maximoff.

In the comics, Wanda wills the twins into existence to give herself a fantasy life with Vision.

She uses shards of the villain Mephisto’s soul to fashion the babies. He eventually takes the shards back, killing the twins and driving Wanda mad.

Her grief threatens to rip apart reality and her mind has to be wiped of their memory.

Many fans are convinced that Wandavision is setting up the introduction of Mephisto in the MCU Phase Four movies as the next overarching ‘big bad’ to follow on from Thanos.

There are also major rumours that Magneto will appear in the current Disney Plus series. The mutant was Wanda and her twin brother Quicksilver’s father in the comics.

Olsen has already recently confirmed there would be a major Marvel cameo before the end of the run.

The actress may also share some secret powers with her on-screen character. Incredibly, when she was promoting 2016’s Avengers Age of Ultron, Olsen was asked about what she would like to see next for her character.

She said: “I mean, my favourite (storyline) is House of M, but that would never happen.

“I mean, if she could have two fake babies and everyone tell her that they don’t really exist and then her just go nuts – that would be unbelievable but I don’t they are going to do that.

“It might be a little too dark for the Marvel universe. When she loses her mind, it’s my favourite thing in the comics. Yeah.”

Perhaps we should ask the prophetic star to spill more about the still rather mysterious future for the MCU, or maybe just some lottery numbers?

Of course, the interview six years ago with ScreenRant was long before anyone had even conceived of Disney Plus or spin-off MCU TV shows.

Wanda and her brother Pietro (Quicksilver) are mutants in the comics, but because Marvel didn’t have the rights to the X-men series at the time, they were changed to by-products of HYDRA experiments with the Sceptre, which contained the Mind Stone.

Now that Marvel has regained the X-Men from 20th Century Fox, the signs are good that Wanda’s comicbook father Magneto will make an appearance.

The 2005 House of M was an eight-part limited series that followed on from the “Planet X” and “Avengers Disassembled” storylines.

Currently, elsewhere, Wanda’s sons have happily grown up to be the heroes Wiccan, who shares his mother’s mystic powers, and Speedster, who has his uncle’s remarkable speed.