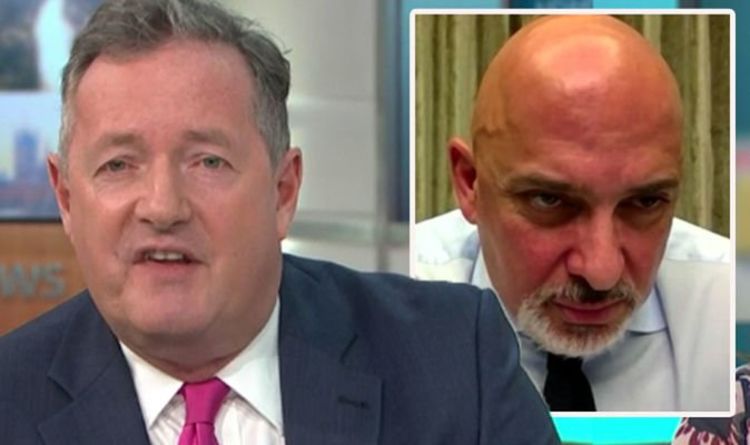 Good Morning Britain host Piers Morgan was keen to find out why the government had not put testing in place for those arriving in the UK. Nadhim Zahawi explained they felt it was “pointless” testing arrivals when they got to the UK which left Morgan furious as he demanded to know why the UK was not following the same steps as other countries when up to 40 million people who could have the virus have been allowed into the country without being tested.

When asked how many people were tested at the border when entering the UK, Zahawi remarked: “The answer is you don’t take a test on the border because it’s pointless.”

“So the answer is zero,” both Reid and Morgan hit back.

Zahawi continued: “I know, I know that Piers, I’m listening to you my friend, just hear me out for a second.”

“You can laugh but let me explain why it’s not a laughing matter,” Morgan erupted.

“Hang on, you just confirmed Michael Give didn’t know, which is the truth, it’s zero. We don’t test anyone at our border when they come in.

“Secondly, we have never required anybody to have a test and to test negative before they get on a plane to our country unlike almost every other country in the world.

“I simply ask again, why? Why given that we know many people must be coming in every day and have the virus?”

Zahawi hit back: “Because if you ask the scientist Chris Whitty and Dr Van-Tam, they will tell you that at the border is near pointless.

“That person may be showing no symptoms, test negative and two days later test positive.”

“So why do other countries insist on us taking tests before we fly?” Morgan asked. “Why don’t we do that?”

Zahawi answered: “All I’m saying to you is the Secretary of State for Transport is looking at these things.”

“I’m asking you as a government minister in charge of vaccinations to try and thwart the virus, why have we never throughout the pandemic, required people to take a test and test negative before they fly into this country? I don’t know the answer?”

“I’m asking you as a government minister in charge of vaccinations to try and thwart the virus, why have we never throughout the pandemic, required people to take a test and test negative before they fly into this country? I don’t know the answer?

“Is it the scientist telling you that doesn’t work. If that’s the case then why does every other country insist on it?”

Zahawi replied: “Well, as I said to you, doing that test at the border, would be near pointless.”

“I’m not asking you that!” Morgan erupted. “A, I don’t agree with that, I think it’s nonsense, and secondly, I’m asking why we have never required people to take a test within say 72 hours as I believe is the government policy you’re looking at.”

Later in the interview, Morgan was even more frustrated when Zahawi was unable to tell him how many people had been tested coming into the UK.

“I haven’t got that number,” he explained as Morgan raged: “You don’t know either!

“We did ask your colleague yesterday, he didn’t know, he said he’d get the answers for us. You’re the next government minister on the caab rank, you’ve come on the show and you don’t know the answer either. At least watch the programme.”

Zahawi desperately tried to defend himself insisting Morgan was “being unfair” but the presenter hit back: “I’m not being unfair.

“I’m simply asking you why none of you know the answers to these simple questions.”

Speaking about the coronavirus vaccine roll out plan, Zahawi said: “We rolled out in hospital hubs with the new vaccine.

“The Chief Medical Officer quite rightly advises that you begin in hospitals just to make sure that everything works properly, then into GPs, what are called primary care network, so five or six GPs covering an area of about 50,000 people come together, decide who will lead, others will support, they’re very good in vaccinating the over 80s and those in care homes – the top two categories of the nine categories that the joint committee have set us as the target.

“Then we roll into mass vaccination centres, with stadiums and sports halls and of course the community pharmacies and independent pharmacies where we think there are gaps.”

‘Why don’t you know?’ Piers Morgan erupts at Zahawi on ‘ridiculous’ lack of border checks