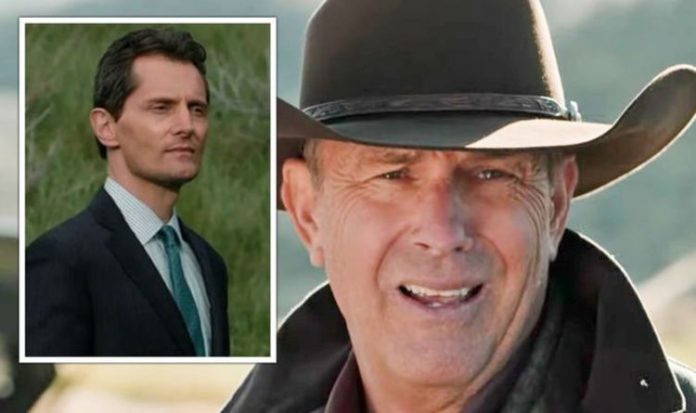 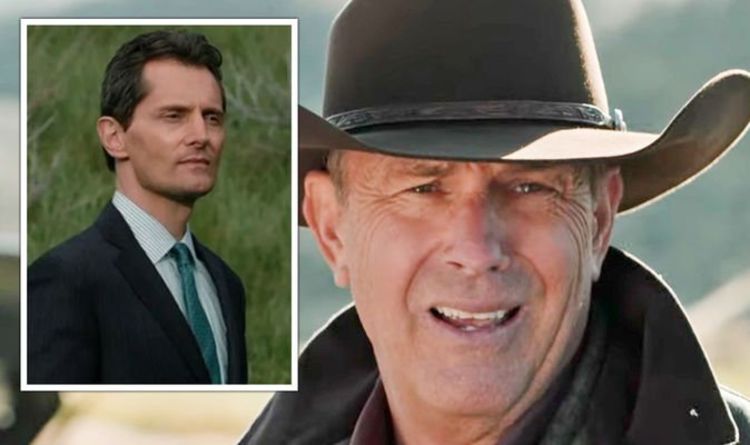 Yellowstone season four has been airing on The Paramount Network and it has been full of drastic twists and turns. With the mystery of who attacked the Dutton family having been somewhat cleared up, there are plenty of secrets starting to emerge. John Emmet Tracy plays Ellis Steele in the Western melodrama and he opened up exclusively to Express.co.uk.

Yellowstone fans have been on the edge of their seats as the Duttons continue to face all sorts of obstacles.

As John Dutton (played by Kevin Costner) and his family attempt to protect their ranch from a number of enemies, they are fighting their own personal battles.

The finale is titled Grass on the Streets and Weeds on the Rooftops and it is scheduled to air on January 2.

While nothing has been given away regarding the final moments yet, Ellis Steele actor Tracy discussed the show’s ending.

He said: “I can’t say much about the season four finale, other than the fact that it will be unlike any previous Yellowstone season finale.

“Taylor Sheridan has an unlimited capacity for exploring the potential of these characters, and by the time season four concludes, viewers will see the threads of the story evolved in ways that are not only unexpected, but in some cases shocking.”

READ MORE: Yellowstone 1883 family tree: Who are James and Elsa Dutton to John?

This could reference a shocking death or pivotal moment which sees the family bond severed once and for all.

Opening up about how the latest season has panned out so far, the star said: “I love that in season four, the storylines are simultaneously expanding and coming into a narrower focus.

“The Duttons are facing much stronger outside threats, like Market Equities’ intensified efforts to develop the land, and Garrett Randal’s increasing influence over Jamie and, therefore, the Dutton family.

“At the same time, season four is doing much deeper explorations of the relationships between the characters.

He continued: “We have seen Ellis Steele interact with many of the main characters on Yellowstone. One of his strengths is his instinct to evolve in order to achieve his goals in these encounters.

“So for example, he interacts very differently with Kayce and Rip than he does with Chairman Rainwater.

“He adapts again when negotiating with Governor Perry. When it came to Beth, it took him a bit longer to determine the best approach (can you blame him?), but I believe we will see him adapting once again to meet the unique challenges that Beth Dutton poses and represents.”

His character may not get on well with the Duttons, but Tracy formed a great bond with actor Costner on set.

He explained: “Kevin Costner is a Hollywood Legend, simple as that. He has box office success, creative success, ratings success and critical success.

“I did get to spend a couple of days working with him in season three, and have had some great chats and a few laughs with him.

“When you are working with him, or when you even meet him, he has the energy and gravity of a star, but not in a superficial way.

“He’s thoughtful, funny, fairly quiet and – it is an overused word in my business – but incredibly generous with the cast and crew.

“The great ones tend to have earned their status not just through success, but also through grace, talent, humility and generosity. That is true of Kevin Costner.”

Fans hope the series will continue for many years to come and Tracy spoke out about its future.

Remaining positive, he said: “Once again, Taylor Sheridan has a seemingly inexhaustible imagination for the potential of this story and these characters.

“He is even currently expanding this world with the prequel series 1883 and the announced spin-off series, 6666.

“While I can imagine this story continuing indefinitely, I have a feeling that Taylor and co-creator John Linson have the arc of the story already fully formed in their minds.

“Meanwhile, the rest of us will just have to wait to see where it will go.”

Yellowstone airs on Sundays on The Paramount Network.