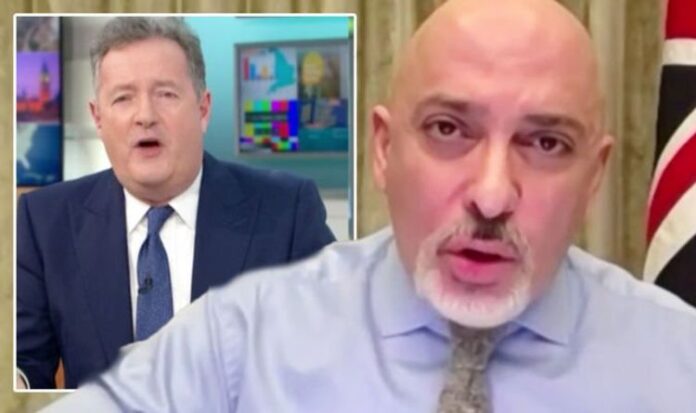 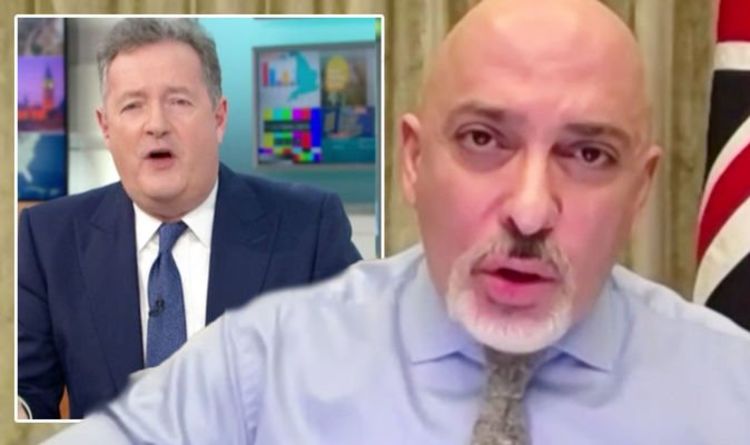 Over the weekend, Health Secretary Matt Hancock was found to have acted “unlawfully” when it came to his conduct over the Government’s handling of PPE contracts. Keen to hear vaccines minister Nadhim Zahawi’s stance on the ruling, Good Morning Britain’s Piers Morgan and Susanna Reid put the spotlight on the politician, demanding an apology from a Government and clarity on whether the UK ever suffered a shortage of PPE for NHS frontline staff.

However, it’s safe to say that when Piers didn’t get the straight answer he was looking for, he wasn’t going to sit idly by.

And while Mr Zahawi did his bit to try and answer Piers and Susanna’s grilling, he too found himself snapping during the fiery row to demand the host stop interrupting him.

After insisting the NAO (National Audit Office) found that “no trust went without PPE”, Zahawi stood firm in his defence but Piers continued to interject: “Was there a national shortage?”

Eventually, Piers exploded and listed off a number of quotes from Government employees who appear to have cited a shortage of PPE in the months gone by.

As Mr Zahawi reiterated his stance, however, he was continually talked over by both Piers and Susanna.

Growing tired of the interruption, Mr Zahawi barked: “You have to listen, Piers! I’ve listened to you, you can’t just speak over me all the time!”

And it appeared it wasn’t just the vaccines minister who grew tired with Piers’s interviewing style.

Taking to Twitter following the row, some viewers insisted that had to “turn over” the channel as the interview took a fiery turn.

“FGS @piersmorgan stop shouting, had to turn over once again. The bottom line is everyone did their BEST at the TIME !!! Let’s try and look forward. You are so depressing to listen to,” one disgruntled viewer said.

A second agreed: “This interview had been carried out earlier on the BBC Breakfast program. The same questions were asked and fully answered by this (excellent) cabinet minister.

“It was an informative discussion completed without shouting, bullying or harassment. GMB’s version was shameful.”

While a third weighed in: “#piersmorgan your constantly putting words into others mouths to elicit your subjective viewed responses. Let them speak!

“The present and future is what’s important. As long as the govt has learnt from their mistakes. Which they clearly have on this PPE point. (sic)”

However, others lauded Piers for his grilling of the vaccines minister, with one adding to the debate: “There would be no need for shouting if the guy gave an honest yes or no answer. And you think Piers is the bad guy?”

As Piers and Susanna eventually had to bring their chat with Zahawi to a close, Piers insisted on showing a harrowing photo that involved NHS workers reportedly wearing bin liners in the absence of PPE.

“Let’s end this with one thing before you go, let me just show you once again NHS staff wearing bin liners,” Piers said as the image popped up on-screen.

“That’s what I call a shortage of PPE, minister,” he added, “when our NHS heroes have to wear bin liners to protect themselves from a killer virus.

“And the reason they had to wear bin liners is because there was a terrible shortage of PPE.

“You know it, Matt Hancock knows it, Boris Johnson admitted it,” Piers continued before branding Hancock as “shameful” for his actions.

Zahawi blasted back that Piers was being “unfair” to the Government staff who’ve worked throughout the pandemic but it was clear the two weren’t going to find common ground.

‘You can’t just speak over me!’ Zahawi clashes with Piers Morgan in explosive PPE row