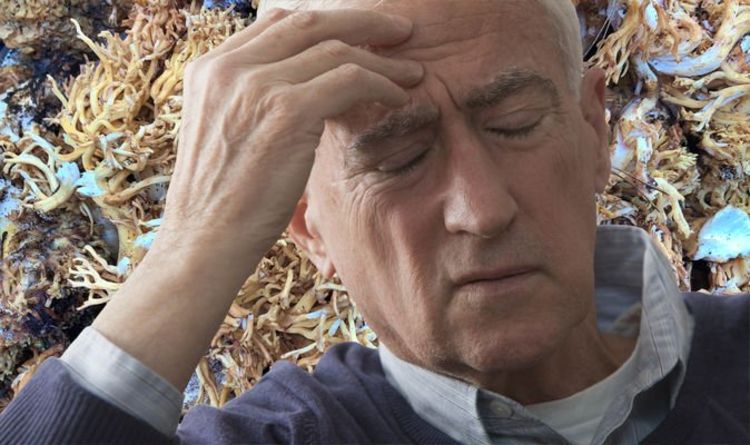 Dementia continues to be a global health crisis, exhausting resources worldwide. But although pharmaceutical companies have made tremendous efforts to halt the disease, trials to date have a poor track record of success. In the absence of a cure, researchers have focussed much of their attention on the protective effects of foods, notably mushrooms. Functional Medicine Practitioner and Longevity Coach Frances McElwaine breaks down some of the benefits of lion’s mane mushroom for cognitive health.

Frances continued: “This can result in the regeneration of damaged nerves and improved cognitive function often experienced as a reduction in brain fog and greater focus.

“In addition, lion’s mane reduces depression and protects against neurodegenerative diseases such as dementia, Alzheimer’s and Parkinson’s.

One Japanese study bears out these claims, showing that the mushroom can improve mild cognitive impairment in the space of a few weeks.

The study was performed on a group of 30 subjects, all of whom had mild cognitive impairment at the outset of the study. Researchers noted marked improvements in subjects who consumed lion’s mane three times a day over a period of 16 weeks.

These findings have been echoed in a string of similar studies, some of which highlight the mushroom’s ability to manage blood sugar as a major benefit for dementia.

Frances explained: “Another great benefit is the lion’s mane also helps us to manage blood sugar efficiently – as one of the major causes of dementia (which is often referred to as diabetes type 3) is actually long-term insulin resistance, this can only be a good thing.

“In addition to including lion’s mane and other mushrooms in your diet, cutting back on sugar and processed carbs is possibly one of the best things you can do to protect your brain health.”

Blood sugar control is indispensable for preventing dementia because blood glucose is heavily linked with the protein beta-amyloid, which is rife in the brains of dementia patients.

This protein can form clumps that lodge between the nerve cells and prevent them from communicating with each other.

This results in memory loss and progressive cognitive decline, two hallmarks of the disease.

Academics explain that one of the most protective compounds against the formation of beta-amyloid protein is omega-3.

Omega-3 boosts brain health by supporting memory and thinking, which reduces the risk of decline.

Frances added: “If Omega 3 levels are optimal, our cell membranes will be soft, allowing nutrients to get in and toxins to get out.

“If it is less than optimal, then the cell membranes become hard which leads to a decline in overall health in general, and a notable reliance on brain function in particular.”

Alzheimer’s: The natural ‘anti-depressant’ that ‘protects’ against cognitive decline

Bowel cancer symptoms: A 'jellylike substance' in your stools could be...