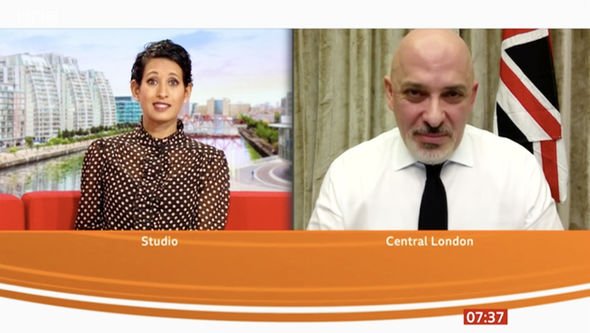 Naga Munchetty led today’s BBC Breakfast interview with Conservative MP Nadhim Zahawi. The Vaccines Minister was on hand to discuss the coronavirus pandemic, the specifications which needed to be met for lockdown to ease and the mass vaccination rollout. During their conversation, viewers noticed how the presenter was extremely keen to probe Zahawi for timelines and dates for when categories one to nine would be fully vaccinated but got her maths wrong ever so slightly.

Munchetty said: “The first four phases – categories – are not phase one, because there is this feeling that February 15 is almost a marker for consideration, reconsideration. So how long then, what’s the next target?

“What’s the date today, the fourth we’re only 10 days away – how long is the next target to get those sections five to nine completed, so that phase one is over and that’s when teachers can be considered for vaccinating.”

“Teachers who are clinically vulnerable will be in phase one,” the politician replied.

“I’m talking about overall teachers – the government set the target date of March 8, potentially for the earliest schools could reopen,” Munchetty continued.

“If you take the mid-February target, that’s 88 percent mortality, if you work forward from that by two to three weeks when the vaccine – the first dose offers the highest level of protection that puts you at the first week of March,” the guest explained. “Which the Prime Minister talked about reopening schools and then gradually reopening then rest of the economy.

“The phase one is the top nine (one to nine), 99 percent of mortality so I  think we should be by then having really good robust data – we’ve got two sets of data which we’re waiting for, care homes and health front line workers.”

“I think you may have misunderstood my question – what’s the target date for completing groups five to nine – if February 15 is groups one to four,” the BBC Breakfast host reiterated.

Zahawi said: “Forgive me, you’re right, we haven’t set a target date, my focus is on mid-February.”

“I understand your target date is mid-February, but you’ll also understand that people want to know when they’re going to be vaccinated,” Munchetty remarked. “We’re being patient, we understand the reasons we’re staying at home, we’re making space, protecting the NHS.

“You’re the Vaccines Minister, ten days away you’ve got February 15, when’s the next target? You’ve got to be looking forward and planning, surely?”

Munchetty cut off the guest: “So we won’t hear before February 15?”

“We’ll set out our target after we’ve hit the February 15 target,” Zahawi said. “But you can do the maths, we did 600,000 in a single day so the deployment infrastructure that we’ve built can do as many vaccines as we get supply.

“But you can see in the next ten or so days, we’ve got to do another – touching five million and so we keep that rate up, we will very quickly go down the list of the top nine.”

“Let’s do the maths while you’re on air,” Munchetty suggested. “Ten days you can do five million people, you are confident. How many people are in categories five to nine?”

“So categories one to nine in total is about 31 – 32 million of what one to four is 15 million,” the politician revealed.

“So 17 million and how long has it taken to vaccinate 15 million – if we’re vaccinating five million people in 10 days, so we could be looking potentially at 35 days from February 15 to vaccinate categories five to nine. Is that a reasonable assumption? Even better if the supplies improve,” Munchetty asked.

“That assumes the supply – I don’t want to commit to a date without going through with a very fine-tooth comb with the team,” Zahawi argued.

“Our limiting factor is our supply of vaccine and as you know, with any manufacturing process – especially one that is new – there are challenges around that.”

Munchetty and Zahawi’s interview sparked conversation online with many divided over how it went.

“Really great interview with Nadhim Zahawi MP-Vaccine Minister on #BBCBreakfast this morning. Insightful and direct questions on the Government’s vaccine strategy. Thank you @TVNaga01 for keeping our leaders to task,” one praised Munchetty on Twitter.

Someone else commented: “@TVNaga01 your questions about vaccinations…thank you. #BBCBreakfast.”

While many were full of praise for Munchetty and the grilling she gave Zahawi, some pointed out the irrelevance of pin-pointing a final date for categories one to nine, which doesn’t include the second vaccination dose, thus full immunity.

One tweet said: “Naga in your calculation of when rest of groups 1-9 will be vaccinated you need to include those having a second dose alongside. #BBCBreakfast.”

“Wrong assumption Naga – you’ve got to take into account people needing their second dose  #bbcbreakfast,” someone else chimed.

Another commented: “@BBCBreakfast Tiers 1-4 wont be done by 15th my husband is tier 5 and his first dose is not until the 21st Feb!!!!”

“I’ll be the first to criticise the UK gov but this is irresponsible journalism from Naga on @BBCBreakfast trying to force a deadline date from them for cat 5-9,” one fan added.

“Naga…your use of primary school maths was misleading. You calculated first doses but totally forgot to include second doses (sic),” one tweet read.

According to Gov.uk, categories one to nine is an order of priory for the first phase of the COVID-19 vaccinations in the UK.

Category one is residents in a care home for older adults and staff working in care homes for older adults, followed by category two which is all those 80 years of age and over and frontline health and social care workers.

The final category which the specifics for are still to be determined, is category 10, which the rest of the population falls into.

BBC Breakfast airs every day a 6am on BBC One.