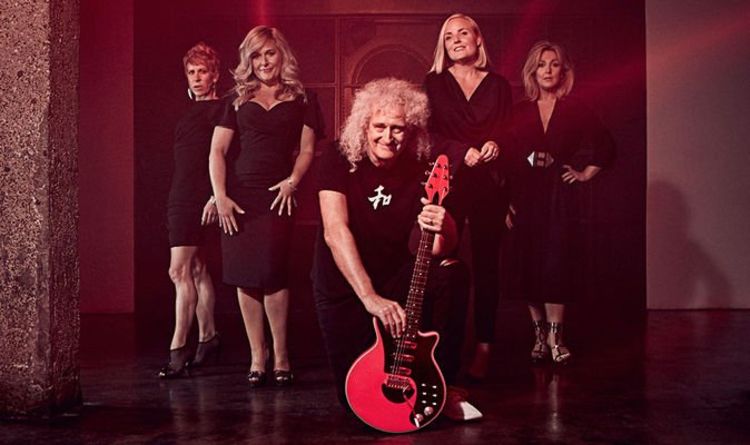 Brian May has had a pretty tough 2020 so far what with Queen and Adam Lambert’s tour dates being postponed due to the pandemic amid the guitarist’s own health problems. But now the 73-year-old is on the road to recovery and has returned to music with a bang. May has teamed up with singing supergroup WOMAN, who include some impressive We Will Rock You musical alumni, for a powerful new charity single in aid of Breast Cancer Awareness.

May posted the music video for the “raw” and “kick-ass” storming blues rock version of Peggy Lee’s 1962 classic I’m A Woman.

Speaking exclusively with Express.co.uk, the Queen guitarist enthused: “It’s very down and dirty; it rocks hard and I love it!”

For the single, in aid of two leading women’s cancer charities (Target Ovarian Cancer and The Caron Keating Foundation), May brought together some familiar We Will Rock You musical faces.

They include the original Meat, Kerry Ellis, who the 73-year-old calls “extraordinary” and long-time Killer Queen star Mazz Murray, who “made the role her own, an enormous talent.”

Alongside, Kerry and Mazz are two just as sensational singers in Anna-Jane Casey, who May points out also did the We Will Rock You workshop, adding: “She’s part of the family as well.”

May said: “It was wonderful. The four of them together are an amazingly strong force.

“They just make me laugh so much; they’re just full of pranks and laughter!”

WOMAN founder and close friend of Gibbs, Mazz Murray said: “We are thinking particularly of our dear friend and fellow performer Rebekah, who we lost, but not before she brought about a change in the rules of diagnosis and specialist referrals through which she has saved so many lives. We remember #gorge.”

The Killer Queen star added that the group and May wanted to highlight and push women into getting checked early for breast and ovarian cancer, especially as there are very few symptoms for the deadly latter type.

She added: “Cancer doesn’t see beauty – fame – money – colour – weight or happiness. It is a random game of poker.

“Get checked early – sometimes you can change your hand.”

Fellow We Will Rock You star Kerry Ellis said: “Sometimes things happen for a reason, this song has been waiting in the wings for the right moment to make some noise! The time is now!

“Cancer affects us all in some way and I am beaming with pride to have joined with an incredible team of talented friends to produce a powerful performance and message. We are strong, we are women and we can make a difference!”

All proceeds from the recording of Brian May and WOMAN’s track will go to Target Ovarian Cancer and The Caron Keating Foundation.

I’m A Woman is available on digital download from Friday, October 23, 2020 and CD and vinyl singles can be pre-ordered here. Fans can check out WOMAN’s Instagram here.