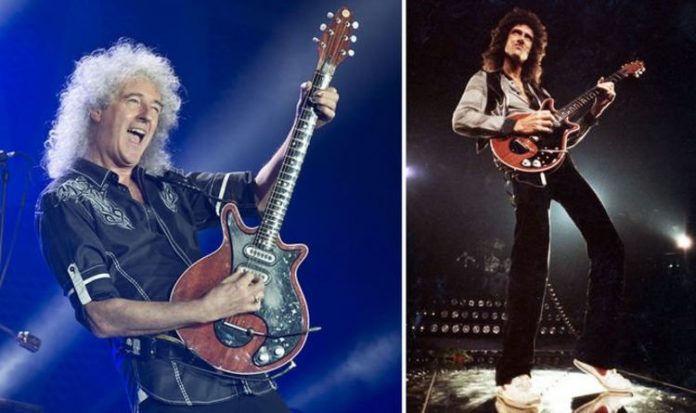 It’s been 50 years since Queen first formed and Brian May and Roger Taylor are still keeping the band on the road with Adam Lambert. The pandemic has postponed their upcoming UK and European tour dates to summer 2022, but the trio cannot wait to get back on stage and perform for the fans. One of the most distinct parts of Queen concerts to this day are Brian’s epic guitar solos.

This week’s episode of Queen the Greatest focuses in on how Brian approaches playing his homemade Red Special guitar live.

Highlights over the years have to be the star performing God Save The Queen on the roof of Buckingham Palace for The Queen’s Golden Jubilee in 2002, 1985’s Live Aid and the closing ceremony of the 2012 London Olympics.

On performing, the 74-year-old said in archive footage: “The guitar solo, it’s half and half. I’d done it so many times, by that time, that there are certain things which I know are going to be good things to try, but basically, it’s improvised.

“But there are certain things which will always be in there because they work.”

READ MORE: ‘Elvis DIDN’T want to marry Priscilla’ so why did The King do it?

Brian shared how he has to work hard to stop his guitar solo from being too repetitive.

The Queen guitar said: “I had to be very careful because you can fall into a trap.

“If something works great and you get a good response, the tendency is to keep doing it, but it doesn’t work that way.

“You’ve got to, sort of, take it to its natural peak and then let it go and try something else because things get old. Y’know, you have to keep yourself fresh and the audience fresh.”

Upon receiving the award, Brian was asked which guitar solo of his he holds with the highest regard.

The 74-year-old said: “Killer Queen. It has always been a favourite of mine.

“It was something a bit more complex, an adventure in putting guitar harmonies into the solo.”