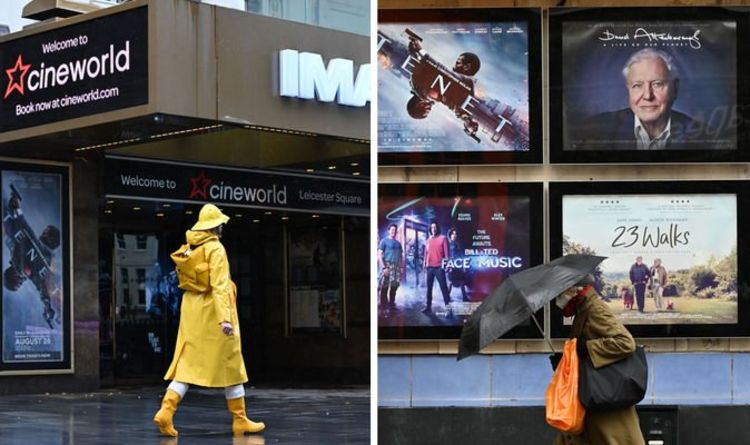 Cineworld has announced it will be closing its cinemas in the US and UK. This was announced over the weekend, but has now been confirmed by the company. With the shocking news now out – when will Cineworld close and has it gone bust?

Over the weekend, it was reported Cineworld would be closing in a shocking turn of events for the cinems industry.

The company then shared a tweet to suggest this was not definitely the case, and it was ‘considering’ this as an option, likely to save money due to the effects of COVID-19.

Now, they have announced this will absolutely be taking place, and it has been reported this will begin from Thursday, October 8.

A statement from the cinema chain reads: “In response to an increasingly challenging theatrical landscape and sustained key market closures due to the COVID-19 pandemic, Cineworld confirms that it will be temporarily suspending operations at all of its 536 Regal theatres in the US and its 127 Cineworld and Picturehouse theatres in the  from Thursday, 8 October 2020.

“As major US. markets, mainly , remained closed and without guidance on reopening timing, studios have been reluctant to release their pipeline of new films.

“In turn, without these new releases, Cineworld cannot provide customers in both the US and the  – the company’s primary markets – with the breadth of strong commercial films necessary for them to consider coming back to theatres against the backdrop of COVID-19.

“These closures will impact approximately 45,000 employees. Cineworld will continue to monitor the situation closely and will communicate any future plans to resume operations in these markets at the appropriate time, when key markets have more concrete guidance on their reopening status and, in turn, studios are able to bring their pipeline of major releases back to the big screen.

“Cineworld’s main priorities remain the safety of customers and employees, cash preservation and cost reduction.  As noted in its Interim Results announced on September 24, 2020, Cineworld is assessing several sources of additional liquidity and all liquidity raising options are being considered.”

It was reported by the BBC that workers in Cineworld have been asked to take a temporary redundancy, with a view to taking back their jobs once the chain reopens its cinemas.

If it is the case these workers are asked to take temporary redundancy, that will mean potentialy 45,000 workers in this position, though at present it has not been made clear if this is the route down which the cinema chain will go.

The statement ended with comments from the CEO, Mooky Greidinger, who commented: “This is not a decision we made lightly, and we did everything in our power to support safe and sustainable reopenings in all of our markets – including meeting, and often exceeding, local health and safety guidelines in our theatres and working constructively with regulators and industry bodies to restore public confidence in our industry.

“We are especially grateful for and proud of the hard work our employees put in to adapt our theatres to the new protocols and cannot underscore enough how difficult this decision was, Cineworld  will continue to monitor the situation closely and will communicate any future plans to resume operations in these markets at the appropriate time, when key markets have more concrete guidance on their reopening status and, in turn, studios are able to bring their pipeline of major releases back to the big screen.”

At present, it seems this decision is a financial one, meaning while Cienworld has not gone bust, it is making a tough call to protect its finances and its staff from the potentially shocking effects of coronavirus.

As well as this, the delays to large scale movies such as Black Widow, No Time to Die and others are likely part of the cause of the closures, as has been mentioned.

At the moment, no reopening date has been shared, though fans will likely expect cinemas to remain closed until the point these large releases return to cinemas, at which point fans will be more likely ro go to the cinema.

Many were hoping Christopher Nolan’s latest blockbuster, Tenet, would draw fans back to cinemas, however it has sadly not had the effect many were hoping for.