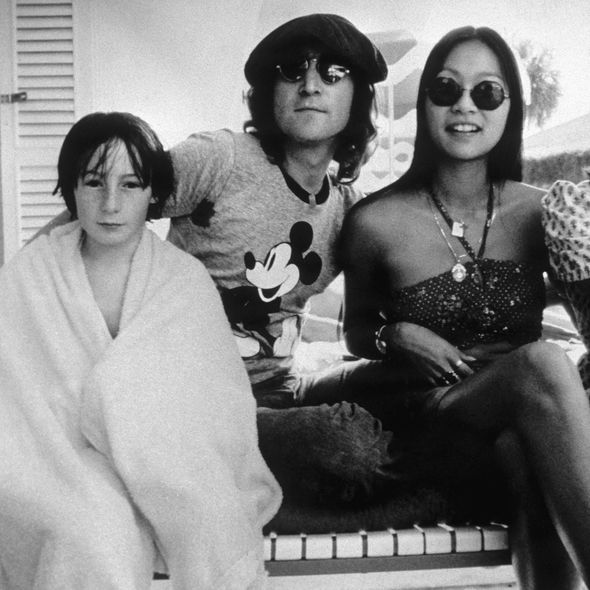 The new two-part interviews are being broadcast across Radio 2 this weekend ahead of Lennon’s birthday on October 9. Elton opens up about an extraordinary two-year period with his fellow music idol. He tells Sean Lennon: “That was the kind of wonderful two or three year whirlwind romance we had and it was such such an important thing in my life, Sean, and it just really helped me. It gave me so much confidence. Your dad was as kind and as generous and sweet and we just hit it off immediately.” SCROLL DOWN TO WATCH ELTON JOHN AND JOHN LENNON ON STAGE TOGETHER

The two international stars only met in person on 1973. By then, Elton’s 1970 breakthrough single You’re Song had been a top ten hit both sides of the Atlantic.

Yet, he was totally starstruck to meet one of heroes and reveals in the new interview how he had cycled eight miles to buy the Beatles’ 1967 album Sgt. Pepper’s Lonely Hearts Club Band.

In return, Sean tells Elton: “My dad, when he first heard your voice he was in America I think already, and he was thinking that’s the first new kind of British singing that he really liked and dug. I think he said that he loved your music and the songs and he liked the song, Your Song.”

Elton describes an incredible two year period that followed, filled with laughter and creative exchanges where Elton played on John’s fifth album, Wall & Bridges, notably on the track Whatever Gets You Through Night. John guest starred at Elton’s legendary Madison Square Gardens concert in November 1974 where they duetted on the aforementioned track, among others. WATCH THEM PERFORM IT BELOW.

Elton said of the whole experience: “It was just, for me, it was a dream come true.

“We laughed so much because we talked about the 50s and 60s and where we grew up, you know, Round the Horne in England, the radio shows we liked, the songs we liked, we didn’t like, and your dad was just a fountain of knowledge. It was a hand in glove thing and I never thought that would ever happen.

“There was no attitude. I hate posers and I hate attitude and your dad didn’t have any of it.”

He tells Sean: “I was a little bit, obviously I was in awe, I was meeting any of The Beatles and they all treated me so brilliantly, but your dad had that edge that none of the other Beatles had kind of because he wasn’t afraid to say what he thought.

“Your dad was as kind and as generous and sweet and we just hit it off immediately. He was so funny. That’s what I loved about him. And we talked about music, we talked about records we loved.

Elton replies: “Yeah, we did other things [laughs]. We did a lot of naughty, naughty things together. We had a lot of fun. Oh my god.”

John had a reputation for a cutting wit and being difficult sometimes (as does Elton). Paul McCartney says later in the new interviews that his fellow Beatle used it to cover his insecurity but John says there was never any unhappy moments between them.

Elton says: “We nearly got into trouble a few times, but we never had a bad word and, and his kindness, you know, I always thought John was the one that could… turn or people say ‘Oh watch out for him, he can turn’, and I think maybe when he was drinking a lot and everything he did, but I never saw that.

Sean suggests that John’s love for Elton would have tempered his behaviour.

Sean says: “I imagine he had… a special love and respect for you so he might not have been the same with everyone necessarily.

“I know for sure that he loved you equally because I read a lot about things he said and he never really spoke of anyone as highly as you, he really did love you.”

John and Elton’s intense emotional relationship would be loosely called a ‘bromance’ these days, but that clearly is insufficient to describe the bond between the two iconic and world-famous artists.

John had left his second wife Yoko Ono during that time and was dating music executive Mae Pang. Elton was riding high on his fist major wave of stardom and success. They clearly both found a safe space with each other.

The intense friendship came to a head with John’s guest appearance at Elton’s legendary Madison Square Gardens concert in 1974. After that, Elton says their closeness faded away, but he understands why.

Backstage after the Madison Square Gardens concert, the former Beatles’ last-ever live performance, John reunited with Yoko. The couple soon had son Sean, who later asked Elton to be his godfather.

Elton says: “After that and then you were born, I really didn’t hear or see your dad at all and I didn’t mind because you know what, he was so happy being back with your mum, and he was so enchanted having you that it was his life had become another thing and so I didn’t really speak to him or see him that much at all or hear from him.

“And I didn’t mind because it was just the fact that that night was so consequential in the history of his life. The fact that he got back together with your mum and then they had you.”

John remained with Yoko until he was murdered by Mark Chapman outside his New York home at the Dakota Hotel on December 8, 1980.

Elton and Bernie Taupin wrote the song Empty Gardens in his memory.