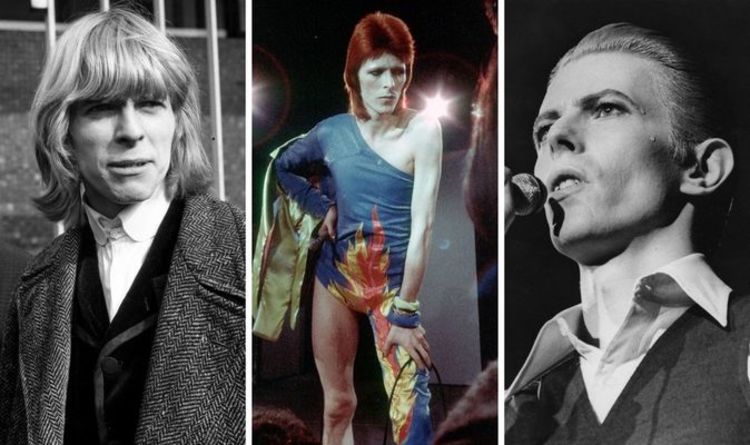 David Bowie’s music was innovative in a great many ways; from production to stage presence. He also had iconic fashion looks including androgynous outfits and characters. Those characters were many and varied – but who were they?

Ziggy Stardust is the first character who David Bowie became famous for, who came with his 1972 album The Rise and Fall of Ziggy Stardust and the Spiders from Mars.

In an interview with Alan Yentob in 1996, made in time for his 50th birthday, David admitted he was inspired by the ‘C-list rock star’ Vince Taylor who he met at a few parties, though Vince was not in the music industry in the same way as David.

He told Alan: “I met him a few times in the mid-Sixties, and I went to a few parties with him. He was out of his gourd.

“Totally flipped. The guy was not playing with a full deck at all.

“He used to carry maps of Europe around with him, and I remember him opening a map outside Charing Cross tube station, putting it on the pavement and kneeling down with a magnifying glass.

READ MORE: John Lennon children: Do Julian and Sean Lennon get on?

David killed off Ziggy Stardust at a concert in London, after which he introduced his new persona, Aladdin Sane, though technically the album to accompany his new persona had already been released.

Aladdin Sane is often considered a more sinister character than his first and is influenced by his time touring as Ziggy Stardust in America.

Speaking to Rolling Stone about Aladdin, he said: “There was a point in 1973 where I knew it was all over.

“I didn’t want to be trapped in this Ziggy character all my life. And I guess what I was doing on Aladdin Sane, I was trying to move into the next area – but using a rather pale imitation of Ziggy as a secondary device.

“In my mind, it was Ziggy Goes to Washington: Ziggy under the influence of America.”

Some have also suggested Aladdin Sane was inspired by David’s half-brother, Terry, who was diagnosed with schizophrenia.

Given David has identified how Aladdin Sane is the alter ego to Ziggy, a far darker and more sinister one at that, this could be an example of their split personality.

The Thin White Duke is usually linked to David’ Station to Statio album, released in 1976.

However, he began using the character slightly earlier, even during his Young Americans tour, and it is believed the look of the character was based on Thomas Jerome Newton, the humanoid alien he played in The Man Who Fell to Earth.

The Thin White Duke wears a baggy white shirt with black trousers and waistcoat and has platinum blonde hair, but is mainly known for his controversy.

During the time of the Thin White Duke, David said some shocking things, with some thinking he had turned into a neo-Nazi or fascist.

Speaking to the Daily Express in 1976, he claimed these comments were an extension of the character and not his views in any way.

He said: “I’m Pierrot. I’m Everyman. What I’m doing is theatre and only theatre…

“What you see on stage isn’t sinister. It’s pure clown. I’m using myself as a canvas and trying to paint the truth of our time on it.

“The white face, the baggy pants – they’re Pierrot, the eternal clown putting over the great sadness.”

Later on in his career, however, David admitted some of these comments came from his use of hard drugs and his cocaine addiction, which was worsening in the period leading up to his living in Berlin.

He said of this time: “It was a dangerous period for me. I was at the end of my tether physically and emotionally and had serious doubts about my sanity.”

On David’s final album, Blackstar, he portrays a man covered in bandages, who is foretelling his own demise.

Of course, the album was released only days before his death, with some suggesting the name for the album actually related to cancer, of which he died.

Other than his musical characters, David has played various extraordinary characters in TV and film, such as the Goblin King in Labyrinth.

Elvis Presley: Guess which of King’s movies is the ONLY one...