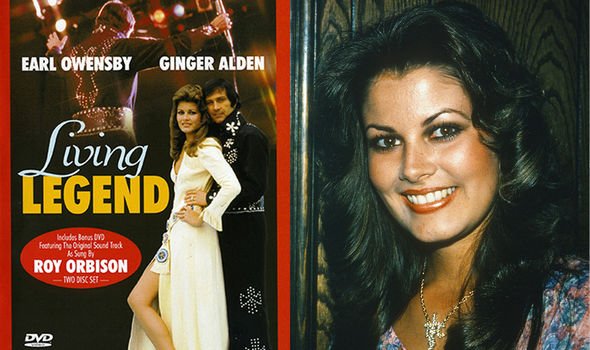 Elvis Presley: Ginger Alden says there are a lot of ‘untruths’

Elvis gave Ginger a massive diamond engagement ring in his final months. She says he told her he had never been in love like that before. She says that they were happily and excitedly discussing wedding plans on the very night he died. So why was she barred from going inside Graceland after The King’s death? Why did Elvis’ family says: “We don’t even recognise her as a human being”? How did things get that bad?

The 19-year-old dated Elvis from November 1976 to his death on August 16, 1977. Originally, The King’s friend George Klein had tried to set him up with Terri Alden but when her younger sister tagged along, the star was smitten.

GInger described how, after only a few months, Elvis proposed: “He said: ‘Ginger, I’ve been searching for love so long, and never in my wildest dreams did I ever think I would find it in my own backyard.

“Elvis brought his hand out from around his back. In it was a small, green velvet box… My hand was still trembling as he kept lifting it to look at the ring saying, ‘oh boy.’”

READ MORE: Freddie Mercury: ‘Secret affair with Carrie Fisher’ WHILE he was with Mary

Although no-one can ever know exactly what was said, it is undeniable that Elvis did propose. The ring itself is incontrovertible proof.

Even the star’s father Vernon admitted that his son was in love: “I never got to know Ginger Alden well. She’s not much of a talker, but a while back Elvis told me he’d fallen in love with her.

“‘This is the love I’ve been searching for,’ he said. ‘I want more children, a son. And I want Ginger to be my children’s mother.'”

Unfortunately, Elvis never lived to see a wedding on any more children. Nor did he ever see how the relationship between his family and Ginger rapidly soured.

Although, the seeds were definitely sown while he was still alive, certain events after his death destroyed any hopes of harmony.

The Memphis Mafia (Elvis’ ever-present coterie of closest friends and relatives) have rarely spoken well of Ginger over the years.

As soon as Elvis was gone, his father made sure the former beauty queen was not welcome and Vernon’s brother had even harsher words to say on the matter.

Vester Presley was Vernon’s big brother and they married sisters Gladys and Clettes Smith. When Elvis hit the big time and bought Graceland, Vester was installed as the guard at the main gate.

Affectionately known to fans as “Uncle Vester” he was a garrulous and freely spoken character who was always happy to chat with anyone who came up.

When he was asked about Ginger following Elvis’s death, Vester did not hold back.

Vester said: “Ginger Alden is dead now as far as the family is concerned. We don’t even recognise her as a human being.”

“She couldn’t get in here on her own to save her life. She’s barred from inside the house. She can go to the grave by calling and asking. Any time she comes to this gate I’ve got to call Vernon and OK it.

“We’re not interested in her. She took advantage of Elvis’ name.”

Many of the Mafia have always disputed that Elvis actually intended to marry Ginger, seeing her as just another of the girlfriends he wooed in order to win over, nothing more.

Walter Alden, Ginger’s father hit back: “If Elvis could only know how they treat her when she goes to the gate. Ginger would have liked to keep up a close relationship with the Presleys. Elvis would have wanted it that way.”

Ginger did not fit in comfortably with the close-knit group, who also believed she was trying to separate them from him. So they were already poised to turn on her when she and her family “took advantage of Elvis’ name” before and, even worse, after his death.

In the short months they were together, Elvis lavished gifts on Ginger, took her on holiday to Hawaii, gave her brother a job, paid her parents’ mortgage and started installing a swimming pool at their home.

However cynically Vester and others might view this, it was standard behaviour for the star who loved to give everyone gifts and always – especially the women he was dating or trying to date.

Unfortunately, Ginger’s mother Jo sued the star’s estate after his death, claiming he had promised to pay off the house and pool and had left them with debts they could not afford.

The situation hit rock bottom when Ginger signed on to make a scandalous film.

Elvis: Ginger Alden starred in The Living Legend – blatantly based on The King (Image: PH )

Eventually released in 1980, Living Legend: The King of Rock ‘n Roll, was ostensibly fiction, but the title alone makes it clear who it was based on. As do the distinctive hairstyle, jumpsuit and big belt.

The main character, Eli Caulfield, was the ultimate performer but suffered from a string of failed relationships and a disastrous addiction to prescription medication. The Presleys were horrified by Ginger’s shameless exploitation of her love affair with The King.

Vester added: “She took advantage of Elvis’ name. Now she’s making some kind of movie about him.”

To this day, Ginger speaks out against the way she has been treated over the years, particularly by Priscilla, on social media. She also wrote a book, Elvis & Ginger, detailing her side of the story.