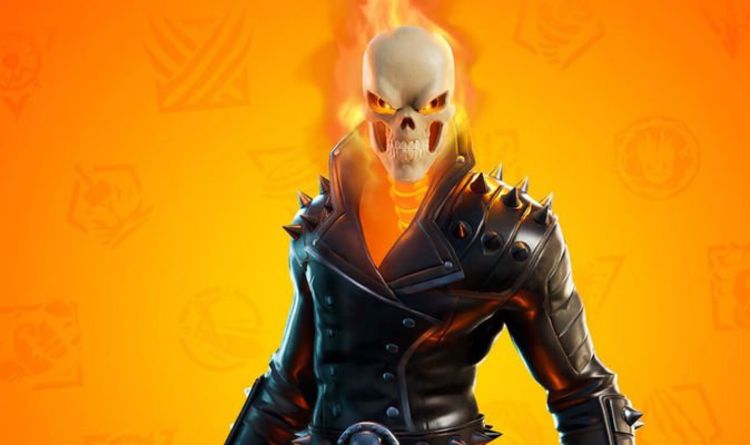 Fortnite gamers don’t have long to wait until they can start trying to unlock the new Ghost Rider skin. Announced as the latest addition to the Marvel Knockout Super Series, Johnny Blaze will be whipping his way onto the Battle Royale scene this week. For those who might have missed it, the Marvel Knockout Series is a spin on Operation: Knockout that sees a team of trios utilize super-powers to be the best squad in the tournament bracket.

Fortnite fans will need to battle against their foes in a 4-round knockout fight, with each round seeing their team awarded a different set of powers to battle opponents with mirrored abilities.

A message from Epic Games adds: “The game mode played during a given Ghost Rider Cup session will be Marvel Knockout. Event sessions will last approximately three (3) hours. Teams may participate in a maximum of ten (10) matches during a session unless otherwise indicated in-game.

“Teams will earn points based on the scoring system listed in Sections 2.4.2 and 2.4.3 unless otherwise indicated in-game. Matches for a session will count only if the match begins before such session window closes.”

WHEN IS GHOST RIDER COMING TO FORTNITE?

Developers Epic Games has confirmed that the Ghost Rider Cup will be starting on Wednesday, November 4, 2020.

The timing of the Fortnite cup will depend on your location, and that means will need to check out the Compete Tab in the Game Lobby to know exactly when to assemble your team.

A message from Epic explains: “For Johnny Blaze, the road to becoming Ghost Rider wasn’t easy. A family curse, demonic manifestations, and other evil events paved the way to creating this fiery antihero.

“On November 4, the Ghost Rider Cup blazes a trail into Fortnite. Scorch through the competition with your trio for a chance to be one of the very first to earn and unlock the Ghost Rider Outfit and Back Bling.”

A guide on how to compete in the Marvel competition can be found below:

Recruit two friends and compete this Wednesday, November 4 in the Ghost Rider Cup, which features the Marvel Knockout LTM (Trios).

Go to the Compete Tab in the Game Lobby. Locate the Ghost Rider Cup and find the local time it starts for your region. The event playlist will be available in the playlist menu once the event has started.

Note: You cannot fill into tournaments and you must reach account level 30 to participate as well as having 2-Factor Authentication set up.

Participants who compete in the Ghost Rider Cup and the two other future cups will still earn the Nexus Glider.

Fortnite is available to download for free across a number of different platforms, including PS4, Xbox One, PC, Switch and Android.