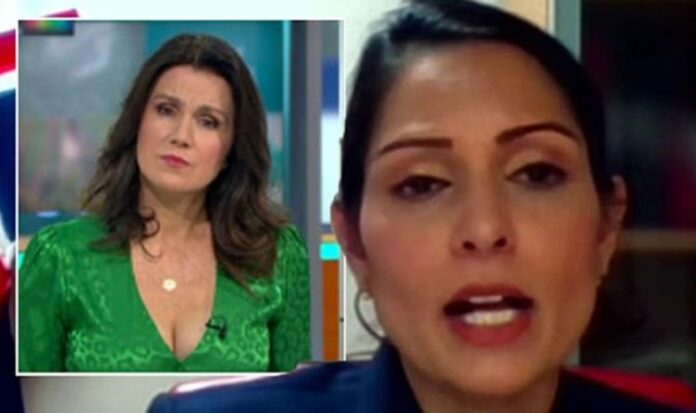 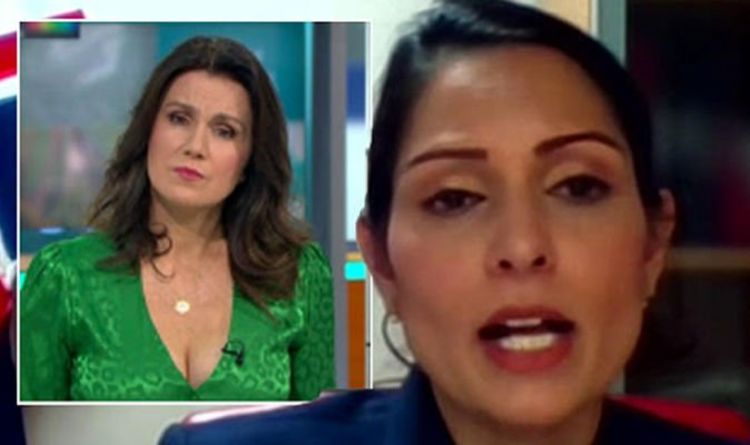 Priti Patel, 48, joined Susanna Reid, 50, and Piers Morgan, 55, to discuss the latest developments regarding the coronavirus pandemic. As the UK is in the midst of the third lockdown since the global health crisis emerged last year, the presenter wanted to clarify comments made by the Home Secretary about how people can exercise under current measures. With confusion rife over whether members of the public could exercise on their own or with others, the pair clashed on Good Morning Britain as the politician declared she wasn’t “getting muddled” with the facts.

During a press briefing she held last week, Ms Patel told the public they needed to “exercise on their own” and not use it as an excuse to “socialise” but Downing Street’s rules contradicted this statement.

Number 10 stated people can either exercise on their own, with members of their own household or those they are in a support bubble with.

Following the backlash, Reid asked the Home Secretary to add more clarity and whether she would like to refute her earlier remarks.

The politician replied: “It’s very well to take snippets of what I said out of context,” going on to add she was simply “emphasising we desperately need people to follow the rules.”

The presenter commented: “On This Morning last Thursday you said people in England should be exercising on their own.

“Now, do you acknowledge that’s not the case, that you can exercise with one other people outside of your household?”

“And the reason I say this is because I’m asking you have sympathy with people who are still a little bit confused about the rules,” Reid continued.

“And when you say they are very clear and very simple, if you yourself are getting them muddled up, that’s not the case, is it?”

The politician then proceeded to shut down her interviewer as she replied: “Well, first of all, I’m not getting them muddled up.

“When I’ve spoken about exercise and recreation, I’ve put it within that context and it is a fact, again, when I was asked questions about exercising specifically, it was about running and cycling.”

One viewer wrote: “This interview is boring, going over and over the same old stuff,” as a second added: “Let’s be clear about this, Patel was talking rubbish!”

A third commented: “She was muddled up. She came across like she didn’t have a b****y clue what she was talking about and every time she was on the ropes she looked to one side and read from pre-prepared notes. Anyone could do that #GMB.”

“Another car crash interview from a Government minister. How pathetic are this Government’s representatives?” a fourth asked.

“The lockdown rules are so simple that @pritipatel has to read them from a prompt during her @GMB interview #GMB,” a fifth posted.

According to the latest figures, another 33,355 people tested positive for COVID-19 yesterday, bringing the total number of cases since March to 3.47 million.

The number of fatalities also increased, with a further 1,610 people dying within 28 days of contracting coronavirus.

It has been explained by scientists the number of deaths will continue to rise despite lockdown having an impact on the rate of new infections.

Currently, over four million over 80s and health care workers have been vaccinated against the virus.