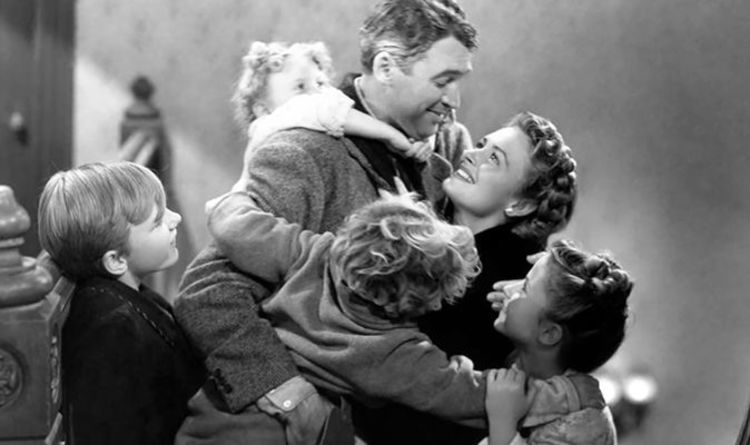 It’s A Wonderful Life is on frequently at this time of year, and even features in other famous Christmas movies like Gremlins. The movie is full of holiday cheer, after a man on the brink of suicide discovers his lust for life after many years of sadness. But what happened behind the scenes, during the filming of the movie?

Well, one important thing which happened before filming is the casting of George Bailey.

The main character is the most important part of the film, and the studio reportedly had their eye on megastar Cary Grant for the film.

However, director Frank Capra was adamant only one person could take the role: James Stewart, who was the one to take on the part.

According to an interview in 1987, the whole filming experience was very emotional for James.

READ MORE:  Michael Jackson Paul McCartney friendship: How did they fall out?

He said of one scene, where George is begging God for a sign: “As I said those words, I felt the loneliness, the hopelessness of people who had nowhere to turn, and my eyes filled with tears. I broke down sobbing.”

Robert Matzen, the biographer for James Stewart, has also spoken out of what filming was like on It’s A Wonderful Life.

He said: “It’s A Wonderful Life was a result of Jim’s war experiences because it unlocked this depth of soul in Jimmy…

“He had to learn to act again and that’s what you’re seeing on screen. It’s like lightning that just got captured in a bottle.”

However, while it may have been a difficult time for James in many ways, the director Frank Capra also struggled, after the screenwriters walked out on him.

The film was being written by husband-and-wife team Frances Goodrich and Albert Hackett, who were happy to keep writing until they heard, according to The New York Times, that the director had hired another writer, Joseph Swerling, to do rewrites without telling them.

Albert wrote in a letter: ”Jo Swerling was a very close friend of ours, and when we heard that he was working behind us — which was supposed to be against the rules of the Screen Writers Guild — it was a very unpleasant feeling…

“When we were pretty far along in the script but not done, our agent called and said, ‘Capra wants to know how soon you’ll be finished.’

“Frances said, ‘We’re finished right now.’ We put our pens down and never went back to it.”

Despite walking out on the project, they were both given top billing as screenwriters after Frank himself, and then Joseph received “additional scenes” credit.

The film, at the time, was a real box office flop, barely making back what had been spent on the production.

While one might think, now it is a festive staple, it would make back its budget in it being played every year on TV.

However, It’s A Wonderful Life did not make this back as it only really gained popularity after the licence on its copyright lapsed, 30 or so years after its release, meaning channels could play it for free.

In 2013, The Hollywood Reporter revealed there was a sequel in the works, It’s a Wonderful Life: The Rest of the Story, however, after years where it looked like a possibility, it never happened and the idea was shelved.