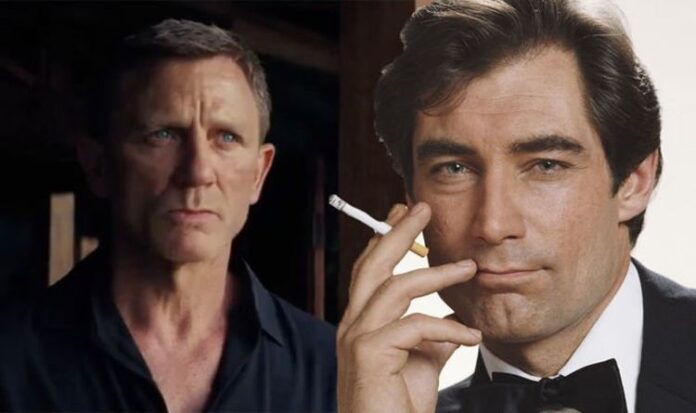 James Bond has been played by a number of actors, starting with Sean Connery in the 1960s. Later, the style of Bond movies chopped and changed, moving from almost self-parody and japes to hard-hitting realism. Daniel Craig certainly falls in the latter camp, but one expert has suggested this could be for a particular reason.

This Bond was softer than previous incarnations, and it showed a character who could love and feel.

However, when his love is taken from him, the following movie, 2008’s Quantum of Solace, shows a much harder, uncompromising Bond.

After this, Daniel’s Bond shows more of his emotional side in Skyfall, when his mentor and boss M dies, after which, in Spectre, he meets a new love of his life, and seems happy with her.

In the trailers for 2021’s No Time to Die, it looks as though Bond is dealing with the betrayal of his new love, even retiring away from everyone he knows to find peace.

This trajectory seems perfectly human, to encounter love and loss and pain in different ways, but is fairly unheard of within the Bond franchise.

Well, one expert would disagree with that, saying what Daniel’s Bond is doing is very similar to another great Bond actor: Timothy Dalton.

According to Dr Ian Kinane, a senior lecturer at the University of Roehampton and editor of the International Journal of James Bond Studies, Daniel Craig has done much of what Timothy Dalton tried to do when he took over the role from Roger Moore in 1989.

Speaking exclusively to Express.co.uk, he said: “You have this kind of reverberation between debonair style, on one hand, and serious, more hard-hitting realism on the other.

“You have to say with this Bond, Daniel Craig, we talked about Daniel Craig sponsors and rebooting the franchise in a way.

“But he’s only really doing what Timothy Dalton did first in the late 1980s.

“So with respect to this development of kind of the films and the actors, for me, I always see it as the rigid notions by which certain types of British masculinity is defined.”

Timothy’s Bond, much like Daniel’s, had to deal with loss, when in Licence to Kill his close friend Felix Leiter is brutally attacked and mauled by sharks, and his new wife is killed.

These darker themes show how the Bond producers are treading similar ground to before, but Daniel has himself explained what he hoped to achieve in his Bond.

He told the New York City’s Museum of Modern Art (MoMA) film curator Rajendra Roy: “Clearly he’s [Bond] suave and sophisticated, but I realised he couldn’t be that at the beginning.

“I had this chance to start over and say, ‘Who is this character?’ Unless it was something based in reality, I couldn’t figure out how to play it.

“It’s got to mean something or otherwise it’s just a repeat of what someone else has done.

“I wanted to find the emotional heart.”

Timothy said something very similar himself, about how his Bond was ‘tougher’ than others before him.

He told Entertainment Weekly in 2010: “Cubby Broccoli, who was producing the movies, said to me then that that’s what he wanted [a tougher Bond], and I agreed wholeheartedly.

“Roger Moore was marvellous at what he did, and his films were successful, so you can’t say a word against him.

“But Connery was shocking. And his movies were shocking. You had never seen women in bikinis in films in those days, and heroes did not shoot unarmed people. But Connery did, and he was tough…

“We wanted to take it back to that earlier toughness. But, of course, it’s got to be funny. It should be funny.

“Out of great danger often comes great humour. But when we made The Living Daylights and Licence to Kill, everybody by then was so used to something else.

“I think people like to stay with what they’re comfortable. So I think Cubby and I were fairly lonely voices!”

Timothy spoke highly of Daniel’s Bond, perhaps sensing how his own influence may have reached the producers at Eon.