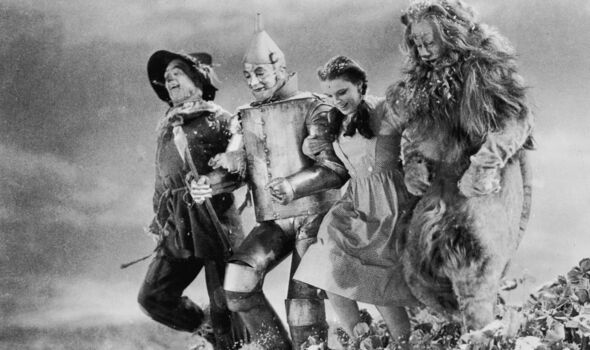 Garland is often regarded as the finest actress the world has ever seen, with a career in show business spanning more than 45 years. Known for her incredible versatility, Garland amassed a brilliant back catalogue of films, as well as claiming a host of awards including an Academy Juvenile Award, a Golden Globe Award, and a Special Tony Award. She was also the first woman ever to win the Grammy Award for Album of the Year, claiming the title in 1961 for her live recording titled Judy at Carnegie Hall.

As she became a star at such a young age, the expectation on Garland was considerable, and followed her throughout her life, until she passed aged 47 in 1969.

Her fame erupted in 1939 when aged 16 she was recruited to play Dorothy in the now-classic Wizard of Oz.

Film sets weren’t new to the star, as she made her first film appeared in 1935 when aged 13 in Pigskin Parade.

But the pressure was ramped up to unknown levels for Garland as she made her breakthrough in the Wizard of Oz.

Journalist Claire Beghin explored Garland’s time on set for Vogue last year, noting: “The so-called ‘Golden Age’ of Hollywood had its share of scandals, including drug addictions, and the mistreatment of artists by the major production studios, and unfortunately Judy Garland was not spared.

“While filming ‘The Wizard of Oz’, Garland was receiving criticism about her weight and had her food rationed by the studio.

“She soon began taking amphetamines, which the MGM studio willingly gave to young actors and actresses in order to give them the energy to continue filming for hours at a time.

“She soon developed insomnia due to the drugs she was taking, which was treated with sleeping pills on top of the medication she was already taking.”

JUST IN: Howard Keel accused of being ‘terrible’ to Betty Hutton on set

Garland claimed an Oscar for her turn in the film, but by then was in the throes of addiction, experiencing severe mood swings, dependency on alcohol and bouts of depression.

Garland’s ex-husband, Sid Luft, discussed what it was like for the star on the set of the Wizard of Oz, and made a series of startling revelations about her time there.

In 2005, Luft wrote that the then-child star was targeted by other actors on set, including those who performed as the film’s munchkins.

He wrote in Judy and I: My Life With Judy Garland: “They thought they could get away with anything because they were so small.

DON’T MISS:
Frail Liza Minnelli, 76, leans on pal after being seen in a wheelchair [LATEST]
The Wizard of Oz’s ‘Munchkins’ were paid less than one surprising star [ANALYSIS]
Loki: Kang the Conqueror star watched ‘lots of Judy Garland’ for role [INSIGHT]

“They would make Judy’s life miserable on set by putting their hands under her dress. The men were 40 or more years old.”

Stardom was difficult for Garland, and she discussed her debut role in Pigskin Parade, claiming she was “frightful” and a “fat little pig in pigtails”.

According to Far Out Magazine, her biographer Lauren Becall said: “From childhood, Judy was placed on drugs – to lose weight or to go to sleep or to wake up. And once you get hooked on pills… it obviously affected her.”

Garland would go on to enjoy an illustrious career and was nominated for a host of awards, including for her turn in the 1954 classic A Star Is Born.

Reflecting on Garland’s life, Luft added: “Most of her teen and adult life, she had been on either Benzedrine or a diet or both.

Judy Garland collected an Oscar for her turn in the Wizard of Oz (Image: GETTY)

“Unlike other actresses, she could not successfully camouflage extra weight, especially because she was dancing and singing in revealing costumes.

“Just four feet and 11 inches, she could be underweight and still appear heavy or out of proportion on screen.”

Garland remained quiet on her career until later in her life.

She told biographer Paul Donnelley, biography.com reports, that she was “working days and nights on end”.

Garland added: “They’d give us pills to keep us on our feet long after we were exhausted.

Then they’d take us to the studio hospital and knock us out with sleeping pills.

“Then after four hours they’d wake us up and give us the pep pills again so we could work 72 hours in a row. Half of the time we were hanging from the ceiling but it was a way of life for us.”