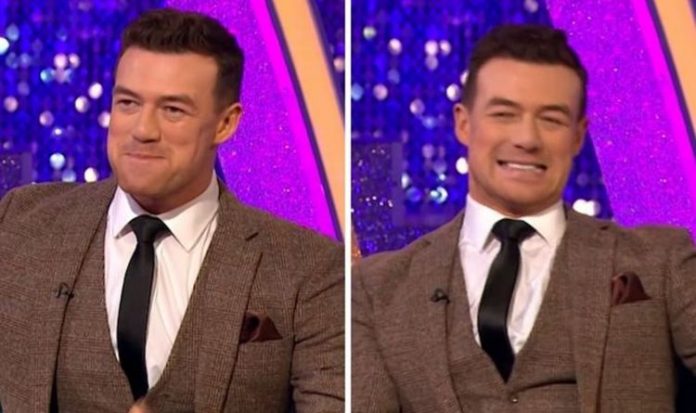 The Strictly Come Dancing star was a recent guest on the BBC competition’s spin-off show, It Takes Two. There Kai Widdrington was collared by host Rylan Clark for making a sly innuendo.

On Monday’s episode of It Takes Two, Kai joined Rylan to take part in the show’s competition, The Pro Challenge.

To be at the top of the leaderboard, the professional dancer had to perform the pat-a-cake and attempt to do as many as possible in 30 seconds.

However, just before viewers got to see how well he did, both Rylan and Kai were discussing how well he thought he did.

To which the professional said: “It’s blooming hard, that metal thing was getting bashed around the place.”

READ MORE: When will Escape to the Chateau reopen? ‘We’ve made a tough decision’

The horrid mishap resulted in the pair finding themselves at the bottom of the leaderboard for the first time.

The judges were also gutted the pair had fallen from their consistent top spot with Craig Revel Horwood calling the final lift a “complete dance disaster darling”.

While Anton Du Beke stated: “It went on and on and on, I was like please stop, I can’t bear it.”

Motsi Mabuse admitted it was a “powerful” performance but couldn’t ignore the fail and added: “Dammit, that ending killed me man. I was just like, ‘girl, come on! Stop the music guys!’.”

Shirley Ballas shared: “Like any quarter-final championship it takes nerves of steel and your ending went wrong. It was on its way to a 10, just unfortunate.”

However, AJ and Kai weren’t the only celebrities feeling the pressure as John and Johannes also suffered a major mishap.

During their take of the salsa, professional dancer Johannes ended up on the floor after their life also went wrong.

However the judges weren’t too upset, this included Craig Revel Horwood, who said: “I love it when it goes wrong.”

AJ and Kai had to face Dan Walker and professional partner Nadiya Bychkova for the dance-off and after AJ performed the lift perfectly, she was sent through to the next round.

Strictly Come Dancing continues Saturday on BBC One at 7:05 pm.