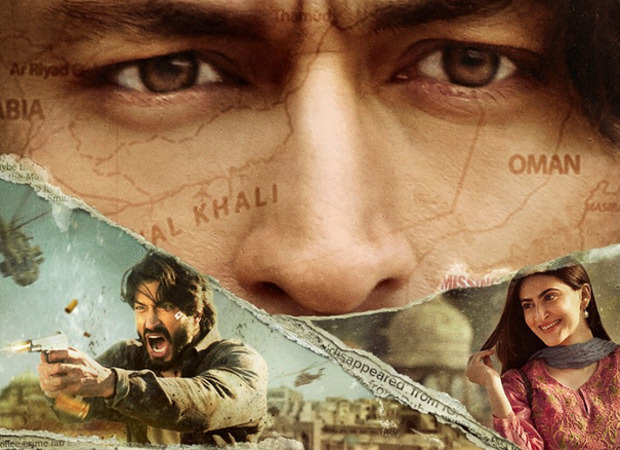 KHUDA HAAFIZ is the story of a simple man whose wife goes missing under mysterious circumstances in a foreign country. In October 2007, Lucknow-based Sameer (Vidyut Jammwal), a software engineer, gets into an arranged marriage with Nargis (Shivaleeka Oberoi). Both fall in love with each other in no time. All

KHUDA HAAFIZ is the story of a simple man whose wife goes missing under mysterious circumstances in a foreign country. In October 2007, Lucknow-based Sameer (Vidyut Jammwal), a software engineer, gets into an arranged marriage with Nargis (Shivaleeka Oberoi). Both fall in love with each other in no time. All is going well until recession strikes the world. Sameer has to shut down his business. Even Nargis is fired from her workplace. They hunt for jobs but three months pass and they fail to get employment. With no other choice, they apply for a job in the Middle-Eastern country of Noman through an agent named Nadeem (Vipin Sharma). Nargis gets the job first and she is asked to leave for Noman the very next day. Sameer is apprehensive but Nadeem assures that she’ll be safe there. He also tells Sameer that the latter’s job confirmation notice should also come within 5-6 days and then he can unite with his wife. Nargis thus flies alone to Noman. Next day she calls Sameer and appears distressed. She is crying and she tells him that this isn’t the job she signed up for. Before she could say anything else, the phone call ends. A shocked Sameer lands up at Nadeem’s office along with the cops. Nadeem feigns ignorance. Sameer immediately flies to Noman’s capital city, Noor Us Saba where Nargis has supposedly got the job. Outside the airport, Sameer meets a kind-hearted taxi driver, Usman Ali Murad (Annu Kapoor) and he tells him to take him to the address of Nargis’s workplace. Usman tells him that this address is incorrect. The cops at Noor Us Saba refuse to help him till he gets an approval from the Indian Embassy. At the embassy, he doesn’t get timely help as the top officer I K Mishra (Ikhlaque Khan) is away. Sameer now has only one clue – the phone number from where he got Nargis’s call. From the mobile company, he manages to find out the name and address of the person owning the number. It turns out to be that of a person named Parvez Shirazi who resides in a town named Baith Us Saif, located 300 kms away. Sameer reaches there immediately. Coincidentally, it’s also the hometown of Usman and he helps him in the search. They realize that Parvez is involved in flesh trade. Sameer’s world comes crashing down. Nevertheless, he goes to the brothel, impersonating as a client and manages to locate Nargis. The pimp (Gowhar Khan) however realizes that Sameer knows her and attacks. Sameer too fights back but fails to rescue Nargis. He and Usman escape and are chased by the goons. They almost manage to run away but then meet with a minor accident. The cops land up and arrest Sameer. What happens next forms the rest of the film.