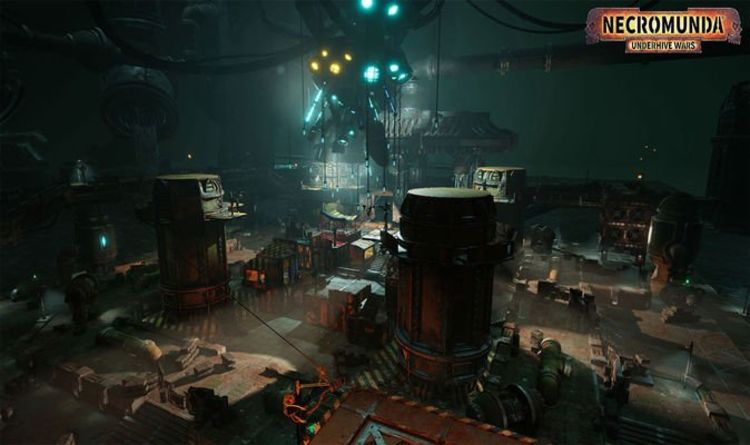 Necromunda: Underhive Wars is arriving this week across all platforms, becoming the latest Warhammer 40,000 spin-off game.

Turn-based strategy fans can look forward to some colourful battles built around gangs from the three great houses of Necromunda – the Escher, Goliaths, and Orlocks.

Each gang has its own skills, providing different ways to take on the in-game challenges:

The Orlocks are ranged specialists capable of incredible accuracy. They’re also tough to kill and the richest of the gangs thanks to their ownership of key industrial areas in the Underhive.

The Escher are a women-only gang that control a ludicrous amount of chem and stim production within the Underhive. They’re also brutal, psychotic killers with a penchant for melee combat.

Goliaths are gene-forged monsters of humans – the muscle of the Underhive. They don’t care for subtlety and will happily engage the enemy with any sort of massive weapon.

And the good news is that we know the exact release time plans for Necromunda: Underhive Wars across all platforms.

Developers Rogue Factor has confirmed the full launch scheduled for its latest game.

The Necromunda Underhive Wars release time has been set for 1 am on September 8 for PS4 and Xbox One, and 11pm BST on September 7 for Steam.

For gamers in the United States, Underhive Wars will unlock on PS4 and Xbox One at 8pm ET on September 7, and 6pm ET on Steam.

For more information on Underhive Wars, you can find an official game description below:

“Gritty, full of attitude and with a wealth of underlying lore, Necromunda: Underhive Wars recreates the brutal and ever-warring metropolis through a wide variety of distinct maps.

“Struggle for victory in brutal gang warfare across Hive Primus’ 26 unique maps and use the verticality, the freedom of movement, and the many traps at your disposal to your advantage.

“Completely gridless, Underhive Wars encourages players to move as they wish across its endlessly grinding rust-heavy factories and forgotten toxic tunnels – but remember: whether you join the Escher, Orlock, or Goliath in your bloody climb to the top, in the Underhive death is ever-looming, and life cheap.

“Your gang is yours to grow as you see fit, tackling naturally developing injuries, vices, and virtues as well as which gangers to hire, how to specialise them, what skills and stats to develop, and much more.

“Experience the brutal world of Necromunda as never before in a close-to-the-action tactical game where every decision is deadly, and all your plays matter. With unique movement and action systems inspired by the tabletop game, you haven’t played anything like this.

“Embrace the massive, mysterious vaults of the Underhive with humongous levels filled with tricks, traps, and true verticality. Outsmart and outplay opponents in single and multiplayer.”

Necromunda: Underhive Wars launches in the UK, on PS4, Xbox One and Steam, on September 8, 2020.