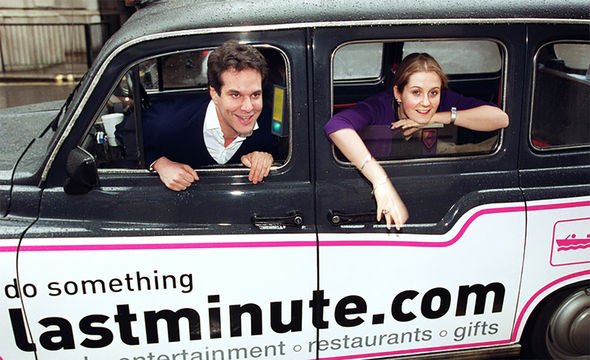 Bronzed and refreshed from a winter break in sun-soaked Costa Rica, Brent Hoberman hums with energy and ideas few other tech entrepreneurs would dare consider. For instance, if anyone else sought backers to create a “robot cook”, they would quite possibly be laughed out of town by investors. But the man nicknamed Mr Tech is deadly serious about the inevitability of a household “bot” to prepare your porridge or fry up a full English.

“It’s coming, believe me, it will happen,” Hoberman beams infectiously. “Kitchen robots that can make your food in your kitchen will become a reality.”

Given his track record, I wouldn’t bet against it. When he co-founded the website lastminute.com with Martha Lane Fox some 24 years ago, many doubted whether even an astute businessman seeking to emulate the tech giants of Silicon Valley in California would pull it off. As CEO Hoberman, then in his late 20s, had a bumpy ride but the business was finally sold in 2005 for more than a billion dollars.

He’s pumped some of that windfall into his dream company The Founders Factory, based in Kensington, London, where he oversees, with a cool relaxed air, perhaps the most creative hub of tech talent in the country.

It’s a bit like one of the Knightsbridge casinos nearby, where millions of pounds are won and lost each night but, with Hoberman spinning the roulette wheel as executive chairman, the odds are usually stacked in his favour.

He has the gambler’s Midas gene, the ability to see a winner and back it to the hilt. He doesn’t lock himself in a grand office, preferring to work on the open-plan office floor so that his entrepreneurial acolytes can see and hear him.

“You have to be a natural optimist and think about what can go right rather than what can go wrong,” he says of his upbeat approach to business.

“There’s plenty of pent-up demand in the economy, particularly for the service industries, so the future is brilliant compared 3, to what we have suffered.” Hoberman, 53, sees people making a switch from goods to services this year and he’s a big believer in “animal spirits”, a phrase coined by the British economist John Maynard Keynes to explain how human emotions can affect he ect consumer confidence.

“Covid has accelerated people’s attitude to health and I think this is the moment when health meets big data,” he adds. He’s currently looking at companies making new drug breakthroughs in treating viruses and those which analyse where the next new variants are likely to come from.

Artificial intelligence, also, will play an increasingly large part in these developing industries and he believes robots will have their role to play.

“What we have seen is the falling cost of making robots and rising costs of employment,” he explains. “We have all seen science fiction films about what robots can do but this will become affordable and it will be good for health.

“I can see a time when you’ll walk into your kitchen and the robot will be there to make your breakfast, porridge or whatever and you can customise it to your allergies or your diet. I’d love to see it where you’d get tested as you walk into the kitchen and it decides what ingredients or nutrients you need. Robots will start in industrial kitchens and quick-service restaurants and then be in home kitchens.”

Hoberman is involved with two companies making this a reality. “We got [food delivery firm] Ocado to invest and it is currently live at their staff canteen,” he says. “They order food on an app and can see it being made by robots. You see the robot arms moving up and down. It’s exciting.”

Mr Tech is deadly serious about the inevitability of a household “bot” to prepare your breakfast (Image: getty)

Thinking about projects like robots making his food is what gets him out of bed in the morning.

“There are two main aspects that I love,” he says. “It’s having a new idea and being abl an leg able to find the right people to execute it and then helping it grow. I am very privileged and lucky to go on that journey.”

Hoberman is chairman of the board of Karakuri, which provides robotics, AI and automation systems, just one of 400 startups he has invested in both personally and through multiple vehicles in the Founders Forum Group, which includes Founders Factory and firstminute capital.

His talent, he believes, is bringing together leaders in the tech industries, seeding development programmes and accelerating them, but he is also aware of the risks.

“I remember at lastminute.com when I put all my chips on the table,” he reflects.

“Our former chairman called myself and Martha to the basement and told us the company was valued at £30million and we had £40million in cash. He said we were a public company and advised us to give all the cash back to investors.

“We said, good idea – let’s not. I said let’s keep going when the chips are down. It was an absolute rollercoaster but you have to have belief in yourself.”

At the time, some so-called experts were predicting lastminute.com was heading for bankruptcy.com but it won through, although Hoberman is more wary now, especially with publicly-listed companies.

He co-founded Made.com 12 years ago, to allow designers and makers of furniture to sell sofas and sideboards directly to homeowners.

It went public and has recently suffered a dive in the share price, partly because furniture producers have had difficulty getting raw materials, such as wood.

Hoberman has no regrets at leaving the board some years ago but hopes they will ride the current storm. “They must take it very personally when the share price is hammered like that [30 percent down] but it will come through,” he says.

“The supply chain will fix itself over time. It is still hard for competitors to beat them at that game. They have a great relationship with designers and enough scale to buy cheaply and cut out intermediaries.”

A new “baby” he is nursing heavily is 01 Founders, a free coding school for people who want to learn computer programming. Currently some 150 students from diverse backgrounds are on the first two-year course in London. Noting the huge demand for computer programmers, Hoberman backed the project with partner companies and, if it proves successful, it could be rolled out nationwide.

“There are supervisors but no teachers and the computer course has been designed through layers of learning. If we can succeed in making 01 Founders a national player we will have made a big impact.We are only six months into it but it is going very well.”

Students are guaranteed a job at the end of the course, but it’s full-time, so any work they do has to be around college hours. By 2030, he hopes 100,000 software programmers will have taken the course. The college will be self-sufficient as the business model operates through the employers paying partnership and recruitment fees.

Now he’s looking at bringing in lessons and lectures given by top teachers at our best schools through interactive tech.

Although born in Cape Town, South Africa, Hoberman went to the Dragon School prep in Oxford as a boy and was “fed” into Eton and then Oxford University. Now he is a fan of democratising education, so the best is available to everyone.

“What I like about 01 Founders is that students from tougher backgrounds can go on to get well-paid jobs. It’s a fantastic way of levelling up,” he says.

As part of their course, students learn about cyberbullying. Hoberman previously headed up Prince William’s cyberbullying task force for a few years. “I was genuinely impressed, working with him [William],” says Hoberman.

“He showed great leadership qualities. I think he gets passionate about everything he gets involved with.”

Hoberman advocated using artificial intelligence to identify toxic language, which is quicker and cheaper than employing thousands to monitor social media postings. Some, however, have doubted whether he was the right man for the job.

“There’s no reason for Facebook to shut down anything,” he argues. “People would go to Signal or Telegram which is a lot worse. I think tech companies are more responsive to change.”

Hoberman and his wife Genevieve are all too aware of the dangers of surfing the net as they have a son Monty, 13, and daughters Jade, 18, and Celeste, 16.

During their break in Costa Rica, the family had what they called phone truces, where they would all stack their devices up and concentrate on spending quality time together.

Now back in the driving seat of Founders, he is playing with the big-tech rollers and looking for the next best idea since sliced bread.

Just before we spoke, he was listening to a podcast by Tesla billionaire and space adventurer Elon Musk, a fellow South African whose career he follows closely.

“I’ve met him a few times and he is on the genius spectrum,” says Hoberman.

“He’s made his dent in the universe. It turned out his mum had modelled for my grandfather’s clothing business in South Africa.”

If he has the same success with kitchen robots as Musk has had with electric cars, Hoberman may be making his own dents in the universe pretty soon.

Is it you in this video? If you’re sent this message...