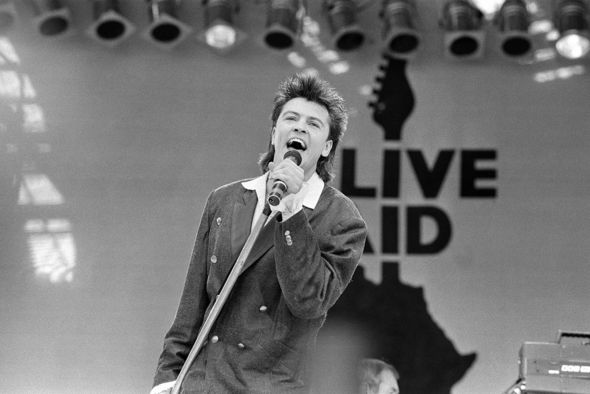 His first album No Parlez went triple platinum; Paul sang the opening lines on Band Aid’s Do They Know It’s Christmas?; and shot to Number One in the States with his exquisite rendition of Daryl Hall’s Every Time You Go Away.

Superstardom was there for the taking. Only it turned out Young didn’t want it.

For him, performing was and remains its own reward – which is why he’s been happily playing medium-sized venues with his Tex-Mex band Los Pacaminos for the last thirty years.

In 1987, he says, “I took a decision to step away. I got married, I became a dad. I needed normality. I’d started to make bad decisions. I thought the third album” [1986’s Between Two Fires] “hadn’t turned out the way I wanted it.”

His record company, CBS, agreed he could take a break – unusual, but Paul had clout. His first album alone sold more than seven million copies. The pause meant Young lost his career momentum, but found contentment.

“I’d had a Number One but we’d be staying in disgusting cheap hotels with nylon sheets. On stage, I was still doing what I’d done in the Q Tips only now the audience were all screaming.  We were still going to gigs in a little transit van but fans were turning out in force. We arrived at one venue up north and it was like trying to drive through a riot.

“As soon as they saw me, they surrounded the van and started rocking it. They were having fun, but it was scary. We were trapped in a sea of people, and for a moment you think, there’s no way out.”

In the States, things got weirder. Paul, 66, a Texan fan asked to start his US fan club. “She seemed fine, but then she started writing odd letters, she began to claim we were an item and started sending me weird presents, like a rhinestone cow’s vertebrae, a cow’s backbone sprayed silver and mounted on a wooden plinth…”

Luton-born Paul shakes his head. He’s 6ft 2, still instantly recognisable and remarkably down to earth – a tribute to his parents, Tony, a pattern maker for Vauxhall, and wife Doris. Young had a four-year apprenticeship at the same Luton factory, re-boring carburettors. His older brother Mark worked there too.

Paul started playing piano at eight, but Free turned him on to blues rock. “I used to go from Luton to London just to go to Dobells, a blues and jazz record shop in Charing Cross Road,” he recalls.

Always shy, Paul’s childhood stutter was cured by performing onstage. At 17, he joined his first serious group, Streetband, who notched up a Top 20 hit by accident in 1978, when Kenny Everett became obsessed with Toast, the B-side of their first single. “We were a rock band and people started coming to our shows expecting comedy,” says Paul. “It killed us dead.”

After his apprenticeship, Young had told his father he was quitting to go pro. “Dad wasn’t happy, but he said, ‘At least you’ll have a trade to fall back on’. He advised me to work nights to build up cash. I did, for six months – it was horrible. But I worked nights for the rest of my life,” Paul laughs.

After Streetband came The Q-Tips, an animated eight-piece who played 250 gigs a year. “Best time of my life…I’ve never laughed so much.”

With his grounding in blues and soul, Paul stood out in the synth-dominated 80s, but says “I didn’t start pinching myself until Live Aid. I’d had hits across Europe and was looking to become successful in the USA. Suddenly it was bigger than I could ever have imagined.”

He pinched himself again in Los Angeles. “Ged was looking after Alison Moyet there. When I landed, he invited me round for tea. I got there and Bruce Springsteen was on the sofa.

“I told him I’d bought myself a Harley-Davidson, a 1971 Electra Glide, and he said, ‘Fancy going for a ride?’ Bruce showed me his motorbike collection – he had a lot! – and we rode through Coldwater Canyon, down to the desert. He was like a historian, explaining all the heritage. A lovely man, what you see is what you get with him.”

Paul was still driving a decrepit Vauxhall Viva in 1983.

Fans who spotted him assumed he was a lookalike. When the royalties rolled in, Young bought himself a limited-edition Porsche 924 Carrera GT and a Dino Ferrari. Now he drives a humbler Lexus 450.

Sadly, Stacey died of brain cancer four years ago. They have two daughters and a son, all grown up.

Paul now lives in Barnet, north London, with his new love who prefers to remain unnamed. “She doesn’t like the attention – she says it’s like being burgled.”

She’s family orientated, he says and ticks him off if he forgets to phone his children regularly.

“We see the funny side of anything, you can’t last without that. She’s into comedians, I’m not, but I like near-the-knuckle stand-ups like Dave Chapelle, Jim Jeffreys and Ron White.”

Wokeness makes him despair. “People should be forgiven for things they said in the past. Now you get one chance and get sent off the pitch. We need to chill.”

He loves cooking almost as he does US roots music. He formed Los Pacaminos in 1992. “It allowed me to play guitar and let other people sing. I’d stopped playing instruments in 1983, because the musicians I had around me were incredible.”

He’s building his own home studio, “a proper man-cave, sound proofed so can practice my guitar, sing and write songs.”

He co-wrote his hit Everything Must Change in the 80s. When I ask what he listens to now, his soulful eyes light up and he name-checks everyone from Bruno Mars to Mott The Hoople via Lana del Ray and “incredible” Carl Hall.

Paul headlines an 80s heritage pop tour later this year with T’Pau and Hue & Cry. Before that there’s an 80s cruise in March, sailing out of Miami, a Go West tour in April and a possible US tour this summer.

He isn’t as exuberant on stage as he was, having fallen off in Australia and knocking his ribs out of position.

Paul’s stand-out gig memories include performing with Crowded House at Mandela’s 70th in 1988 and with Queen at the 1992 Freddie Mercury tribute.

He’s now working on a new solo album compiled from twenty years of unheard solo projects. “I remembered them in lockdown,” he says. “Songs I demoed with artists in Nashville. I’ve been mixing, adding strings, re-recording parts. I’m looking to master the tracks soon.

“I’m really proud of Tularosa, which I wrote with Paul Barfield in the 90s. It’s a beautiful song, with a hint of Roy Orbison. I won’t stop performing any time soon.”