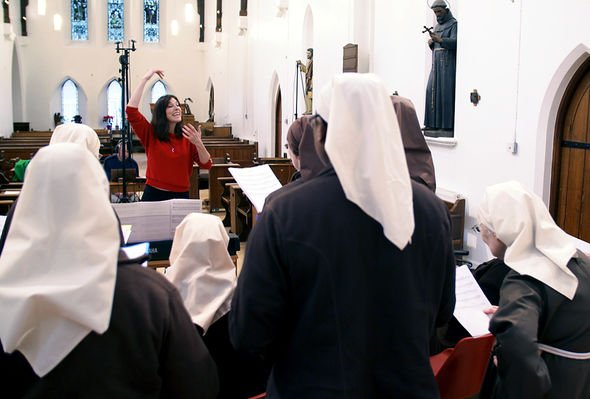 In between takes, laughter echoed around their convent chapel, as it always has done. For the Poor Clare order of nuns, joy has been as important a part of their lives as work and prayer since St Clare of Assisi first set out her vision of devotion in 1253.

And for the 23 nuns of the order’s Arundel convent, that has put them in the habit of singing, which they love.

So they are delighted that their first attempt at recording an album of chants has stormed the charts.

The nuns are so overjoyed that their soul-soothing music has brought happiness and comfort to so many other people during the pandemic that, as soon as they are able, they plan to celebrate their “great adventure” with a party.

It’s sure to include some dancing, the odd tipple (or juice for the sisters who don’t like wine) and, of course, singing.

“We’ve been overwhelmed by the response as we had no inkling it would take off in this way,” said a thrilled Sister Leo.

The calming melodies and chants were recorded last autumn by classical music conductor James Morgan and his opera singer wife Juliette Pochin long before Covid-19 struck and anyone realised how much the album would appeal to people’s yearning for solace and hope.

“When we started the recording sessions we realised how much fun we were having and how good it was to work with James and Juliette,” explains Sister Leo.

“We said when it’s released we should have a party and invite them and their families, but of course we can’t do that now because of the restrictions.”

The nuns are overjoyed that their music has brought happiness and comfort to many (Image: CHRIS O’DONOVAN)

So, celebrations next year, hopefully.

“Yes, we can have a glass of something. We have some sisters who don’t enjoy sherry or wine so they have orange juice. We do circle dancing, that’s a great favourite with some of the more active sisters,” she added.

Demand for the album has taken record bosses at Decca by surprise and they have admitted selling out of their entire current stock of Light For The World.

Comments from the sisters’ new fans have shown the calming quality of the plainchants – some taken directly from the words of the nuns’ Italian patron saint St Francis and his devoted follower St Clare.

Zimbabwe-born Sister Clare Ruva said: “The music is transcending religion. We had a message from a Muslim person who said ‘your music has touched my heart’. Believers and non-believers, Christians and non-Christians have all been touched.

“We were not expecting this but we are so happy it is doing what we wanted it to do. It is touching hearts, giving us the greatest joy.”

James, 51, who lives in Sussex with wife Juliette, 48, and their three children, came up with the idea of the album because he had always enjoyed listening to religious chanting while being raised as a Catholic.

His mother Patricia suggested he should approach the Poor Clares of Arundel as she’d heard they sang well.

“They invited me down to listen and I went to some of their vespers (evening prayer) and they sounded really beautiful,” said James.

“I put the idea to them of making an album and they asked for some time to discuss it in their community. Once they were committed, they were great to work with.

While the nuns are overjoyed with the success, they are not planning a second album (Image: PR)

“They wanted a mixture of music, plainchants going back to the 14th century and new music in a similar vein, very contemplative and meditative.

“They wanted to use some words from Saint Francis and Saint Clare so we looked at texts and set some of them to music for the first time. They were keen to find something new they could sing in their daily services.”

James and Juliette, who do a lot of recordings for Decca, packed up their recording equipment and set it up in the nuns’ chapel at Arundel, which has excellent acoustics.

“We had a wide range of abilities and ages, right up to someone who celebrated their 90th birthday,” said James. “I felt a spiritual connection to the chants. There is something special about working with people doing something with all their hearts.”

Juliette added: “We were looking for texts which weren’t too wordy and would speak to people who don’t necessarily have a faith or religion but would still have a calming, spiritual connection.

“Working there was like medicine. We came away thinking, ah, what a lovely day we’ve just had. Recording can be stressful, but we always came away feeling less stressed.”

But they did put on a few extra pounds as the generous nuns offered samples of their excellent home-baked bread and cakes.

Juliette said: “When we did this last year we didn’t know Covid was going to happen so it’s strange how fitting it has become.

We hadn’t planned it that way.One of the sisters said she wanted it to be something her nephew could listen to if he was really stressed at school. There were so many
reasons for wanting to record the album, but the main one was they wanted to make music which would make people feel better.”

One chant called You Are Love, taken directly from text written by St Francis, who did much for the poor in the 12th and 13th centuries, has proved to be particularly moving for many listeners.

Sister Leo said: “The comments from people have been very touching and we’ve been moved to tears by some of the stories.” A flood of emails, letters and Facebook posts have shared the response, with some people playing the album as a loved one lay dying – easing the pain of the moment and giving hope at a dreadful time.

Sister Clara said: “I think the album has come out at the right time as some people are struggling with the restrictions of the lockdowns. People want to experience something of God’s love and peace, they need something to calm them in their anxiety.

“One of the tracks says all who are weary and tired, come to me and I will give you rest. When we are singing,we are praying as well and I think that feeling of community and togetherness comes across.”

The nuns’ joy is not only infectious but is proving profitable. They’ve already decided their share of royalties should go to charity.

As Sister Gabriel Davison said: “We are thrilled that our music has touched the hearts of the public and has reached No 1 in the Classical Chart.

“We hope Light For The World will bring you peace, joy and a sense of calm as you cope during these difficult times of isolation and stress.”

Tom Lewis, joint MD of Decca Records, is also delighted. “I don’t think we’ve ever seen a reaction like this,” he admitted.

“We heard of people stopping their cars in tears having heard the music and message of the Poor Clares.

“It has caught us totally by surprise to the extent that we are currently out of stock! Their music clearly contains a magical musical balm that people need right now.”

The sisters’ party will have to wait, but that won’t stop them singing, and laughing, as they go about their daily lives.

In the meantime, they are not letting topping the charts go to their heads. While they are overjoyed with the success, they’re not planning a follow up album.

But who knows? The Lord works in mysterious ways, after all.