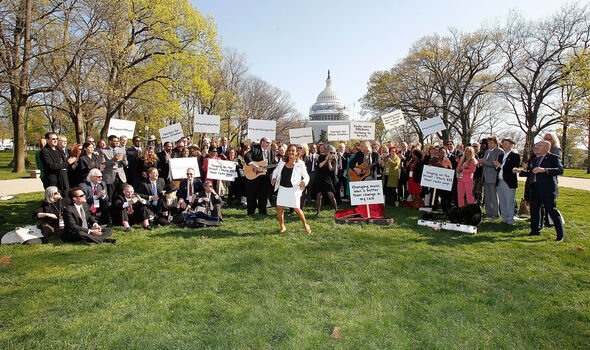 Kathy Sledge will perform at the O2 in London (Image: Getty)

“We’d go to these countries and be treated like superstars, then I’d come home and get the bus to school… “I learned quickly never talk about it at school and never let it go to my head. If I’d said I’d been singing on stage with the Commodores, nobody was going to believe me anyway. The act grew organically. “We didn’t even have a name until an MC asked us for one,” recalls Kathy. “My sister Kim shrugged and said ‘Sledge Sisters’.”

Then, at a New Jersey club, an MC who’d had one too many bourbons mixed his words up. “Instead of Sledge Sisters he introduced us as Sister Sledge. My eldest sister Carol said, ‘That’s kinda cool’, and we kept it. It was never planned.”

Kathy was eleven when they performed their first ever gig. “My mum was paid,” she says. “We sang everywhere for years. It became ‘professional’ once we got paid for it! I have a strong visceral business acumen now; it was so much more of a learning experience back then.”

The girls had their first hit in the UK with the funky Philadelphia soul hit Mama Never Told Me in 1973, five years before they breached the US Billboard Top Ten.

The following year Sister Sledge performed at the historic Rumble In The Jungle boxing bout, when Muhammad Ali fought George Foreman in Zaire, Africa. The build-up included a music festival, with James Brown and BB King. “Everything happened in the middle of the stadium,” Kathy recalls. “We had 80,000 people watching us when the power went out. So we immediately went into a version of Spirit In The Dark by Aretha Franklin with an African-influenced indigenous dance until the power came back. It was quite impactful and memorable!

“That’s only from learning how to be entertainers over the previous years. It was scary but a huge moment for me; it taught me that your passion will always come through.”

Meeting Ali and Foreman was “everything”, she says, adding with a laugh, “I came up to their belt buckles.”

Kathy, second from the left, and Sister Sledge pose in 1984 (Image: Getty)

The sisters had flown over with Godfather of Soul James Brown, and because Zaire was French-speaking, her late sister Joni taught Brown to say “I am home” in French – “Je suis chez moi” – which went down like George did in round eight.

“Chez moi” for young Kathy was a humble house in south west Philadelphia. “It was very small; we were sharing bedrooms. Back then, my aunts and uncles all lived under one roof. But our home was always filled with laughter. I have fond memories of waking up every day up to the smell of coffee, and breakfast cooking,” she adds, smiling warmly.

“Our home was full of music. I remember dancing in the mirror, singing the latest hits, hearing the old songs, my grandmother teaching us harmonic vocal chords on the piano…”

Father Edwin was a ground-breaking Broadway tap-dancer, mum Florez an actress, and their maternal grandmother Viola was a classical opera singer who gave the girls vocal training.

Kathy adds, “We weren’t rich in money but rich in so many other ways. The best things in life aren’t things. These are priceless memories. They shaped us.”

Things changed when they moved to an all-white neighbourhood. The sisters encountered racial bigotry ranging from prejudice taunts to cross-burnings. “In some instances, we had to have police protection walking to school,” she says. But hatred made the sororal bond tighter.

“We protected each other and stuck closely together.”

Their backstory inspired Chic co-founders Nile Rodgers and Bernard Edwards to write and produce Sister Sledge’s biggest hit, 1979’s platinum-selling We Are Family – the album of the same name sold more than a million copies.

The classic song, with Kathy on uplifting lead vocals, became an anthem of female empowerment, and the alliance spawned other hits, notably Lost In Music and He’s The Greatest Dancer.

Sister Sledge topped the UK charts with Frankie in 1985 after going Top 5 with Rodgers’s remix of Lost In Music. B-side, Thinking Of You also charted high. In the US, they went Top 30 with a cover of Mary Wells’s My Guy – “a song I used to sing using my hairbrush as a mic growing up,” Kathy laughs.

Fans were largely friendly, but she recalls, “We had some incidents.  One with someone following us around on tour, hiding in the laundry bins in the hotels to get close to us. He had a massive crush on us, one time he ended up in our limo. The security thought he was with the group!

“That was the craziest of times. Once a fan also turned up at my grandmother’s house in Philly with an engagement ring for me. She didn’t know, she invited him in! They had a lengthy conversation. In retrospect, it was a little eerie.”

She launched a solo project in 1989, topping the US dancing charts with 1992’s Take Me Back To Love Again, but it caused rancour with some of her sisters as their law suits followed her. “Protecting the brand ‘We Are Family’ and being ousted from the band was a huge strain and quite a cathartic time for me,” Kathy says softly.

“I’d like to make this very clear. I never stopped performing, and I certainly never left the group. I was however given an ultimatum and put out of the band when I decided to do a solo project. My sister Kim is my neighbour, just before the pandemic, she knocked on my door and apologised for my other sisters. She also voted back my rights to have a managerial voice within our company.

“Everything has now come full circle.

“The truth is for years I used to have fight for the right to sing, I was voted out of using our band name in any performance. But the passion for my music kept me going. Presently Kim and I are restoring all of our social media platforms to represent the original founding sisters. The rightful group members. It’s quite refreshing.”

Kathy, who is currently being approached by networks to turn their story into a documentary film, is a woman of many talents – including producing concerts and stage productions.

The Brighter Side Of Day is about the late legendary Billie Holiday. “I’ve always had a passion for Billie. As a little girl, I remember my aunt had loads of her records. I realised I could do her voice quite well and my mother said, ‘We should add that that in the Vegas act’. I’ve been told I capture all of Billie’s nuances.”

In the 70s, when the Sisters opened for comedians such as Jay Leno and Bill Cosby in Las Vegas, her impressions got standing ovations.

Gladys Knight, Mavis Staples and Stevie Wonder were Kathy’s other big influences along with Freddie Mercury. “I love him. As a performer he was totally uninhibited.

“I’ve always been a big fan of Queen. I read once that they open with one of their biggest hits and I’ve incorporated that in our production, opening with Lost In Music. Learn from the best!”

Performing with Prince, at Essence Festival in New Orleans in 2014, was her personal “epic high”.

“He asked me to be the surprise guest,” she recalls. “I was supposed to surprise the audience by coming on to perform We Are Family with Nile Rodgers, but the surprise was on me.

“The audience reaction blew me away. I saw a wave effect go to the top of the stadium. It was the most electric on-stage experience I’ve ever had.”

Since then, Kathy has collaborated with a host of her favourite producers, ranging from Robert Miles to London-based Horse Meat Disco.

During lockdown she performed virtual concerts, including the presidential inauguration, from home and launched Family Room as a mother-daughter talk-show on Instagram Live. They are currently meeting with networks to take it to the next level.

She continues to tour frequently and has learnt how to find life balance. “When I’m off-stage, I’m off-stage and that’s my precious personal time.”

Kathy performs here next month. “My heart is huge for my English fans,” she says. “I grew up with the music over there, I love your support for authenticity.

“I get my high from the audience singing my hits along with me. I can’t wait to be back.”