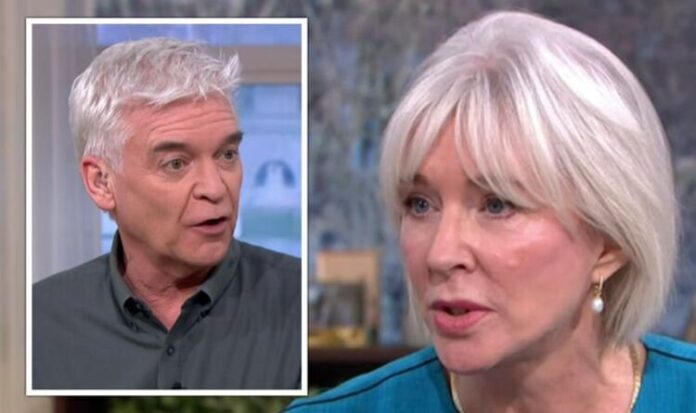 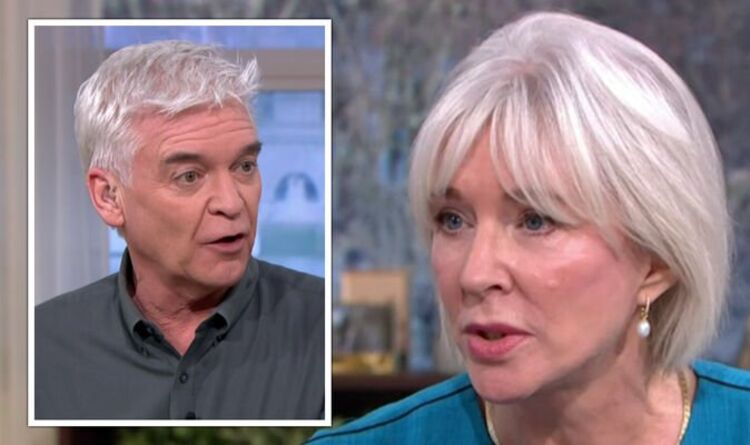 Culture Secretary Nadine Dorries appeared on Wednesday’s instalment of This Morning as the Government prepares to publish reformed legislation to tackle online abuse. The changes to the Online Safety Bill will see social media sites required to give users the option to block legal, but harmful content. However, host Phillip Schofield branded the bill “scary”.

Dorries told Schofield she has been preparing for the bill, saying “huge amounts” of money and resources have been poured into it.

However, she stressed: “Platforms could take down those harmful algorithms right now, they don’t need the bill, they can actually do it right now themselves and they actually do in other jurisdictions.”

Dorries explained platforms could get a 10 percent fine on their global annual turnover and individuals could face prison time if they fail to comply with the bill.

“Ultimately if they fail to comply with the bill we can block those platforms,” she added.

Dorries replied: “We don’t want to do that because we recognise, particularly with the Ukraine crisis, they have been a force for good and so we want to work with these platforms.”

“It all sounds a bit Russian to me.”

Dorries replied: “I’ll tell you what is scary, algorithms, which direct young people into suicide chat rooms [and] into anorexia chat rooms.”

She claimed there was a 22 percent increase in young women who suffered from anorexia last year.

“Bullying, racism, trolling, all that is illegal offline,” she told Schofield.

“It is scary it is horrific, but then you start to look at the wider picture of free speech and whether or not, ultimately, the Government will shut down Facebook,” Schofield added.

“We hope we never ever get to that point but we have to put legislation in place that those platforms have to abide by to protect our children and to make the UK the safest place in the world to go online,” she stated.

“We don’t want pornographic images popping up on our children’s phones or our screens unasked for, we don’t want our children taking their own lives because the algorithms know who they are and direct them to some very bad places.”

Schofield said he hopes the bill will work as the matter was “utterly heartbreaking” and “occasionally terrifying”.