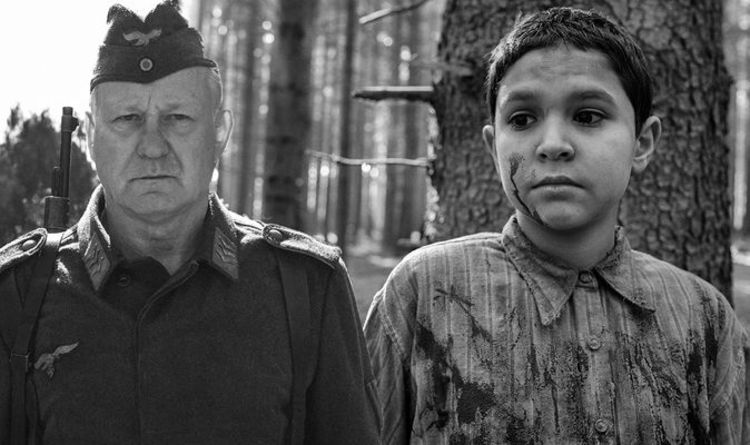 The Painted Bird tells a story that will stick with viewers for a long time. Following a young boy through a war-torn Eastern Europe, viewers see this child witnessing and experiencing some utterly horrific events.

From child abuse, sexual abuse, and murder at the hands of the Nazis, The Painted Bird illustrates an absolutely abhorrent picture.

In saying this, however, the film itself is perhaps one of the most stunning visual displays ever made.

Viewers will certainly want to look away from the horrors that are befalling the child on screen, however they may struggle because of how glorious it looks.

In a sleek, shiny monochrome, The Painted Bird is robust in its homage to filmmakers of old.

Stellan Skarsgard arrives in the film briefly, a portion of the way through the three-hour epic, prompting a promising turn of fate for the film’s protagonist.

Skarsgard recently spoke exclusively to Express.co.uk about The Painted Bird, and how he enjoyed working on it.

Diving into praising the picture, he said: “It’s the kind of film that isn’t made any more.

“It resembles the Eastern European films of the 60s – the glorious days of the 60s and 70s – but they don’t make them anymore, so I really wanted it to be made.”

Of course, one of the methods of driving the story forward in The Painted Bird is not through dialogue, but instead through the actions of everyone around the film’s protagonist.

On the decision to cut dialogue out of the film’s equation, Skarsgard confessed: “That made me really happy.

“I knew he was going to tell this story in a cinematic way and not with words, and that’s part of the power.

“It’s not spilling blood all over the place, it’s not shooting down 15 people, it’s not blowing up an entire building – it is violence as violence is.

“They’re criticising a film that is showing violence, that is not pleasant to watch. And violence isn’t pleasant – at least not to the people exposed to it.

“So of course people [are thinking] ‘I don’t want to choke on my popcorn when I see violence’.”

With a sigh, he added: “Sometimes you’ve got to do film with violence the way it is.”