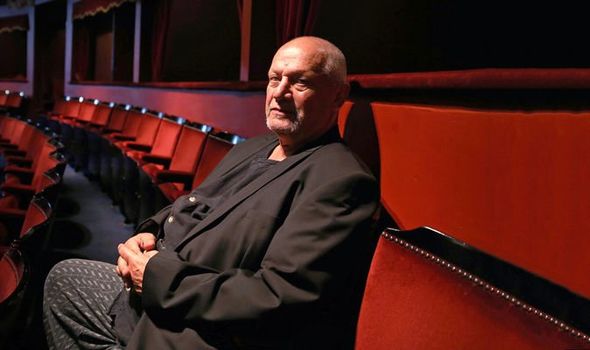 Steve Berkoff insists he doesn’t have a villainous bone in his body (Image: PA)

From a career ­spanning more than half a century, dastardly roles ­followed in, among others, McVicar, The Krays, Rambo and in the TV mini-series War And Remembrance in which he was cast as Adolf Hitler. “I’m scared of Steven Berkoff” is even a line in the song “I’m Scared” by ardent fan and Queen guitarist, Brian May, whose wife, Anita Dobson, has appeared in several of Steven’s plays. But, insists the actor, in ­reality he doesn’t have a villainous bone in his body.

“I was hugely flattered by Brian,” says Steven laughing, “but these are just parts I’ve played as an actor, because I am quite the opposite in real life.

“My cousin, who was a really tough guy, whom I worshipped, died recently and before he died he said to me, ‘You know, Steve, you’re always playing these tough guy parts and yet you couldn’t punch your way out of a paper bag’. And I said, ‘That’s right. I’m an actor, I am not the real thing, that’s what actors do, they play tough guys’, so it’s nothing to do with being tough.”

This misconception, Steven believes, is actually down to his spirited defence of and dedication to his true passion in life: theatre.

And it is easy to forget looking at his extraordinary body of film work – including his latest appearances in the thriller series Red Rage and Righteous Villains, modern-day tales of good versus evil – that Steven is an award-winning and prolific author, playwright and theatre director.

Making movies, says the 83-year-old, has merely been a way of financing this. “Particularly when I had my own (theatre) company I have always been fiercely defensive of my work, the actors, the plays I write and direct and this kind of work was off the beaten track, more radical because I explored the med-ium, I explored movement and mime and I used to go to the gymnasium nearly every day to work on the body and make the company far more physically adventurous. So when some critics were spiteful about my work I would rather fiercely defend it and sometimes I let out a few steaming paragraphs about them – or to them – which might have given me a reputation of being a little bit too tempestuous.”

The actor’s latest appearance is in the thriller series Red Rage (Image: NC)

Occasionally, as an actor, Steven says it is necessary to sacrifice ­yourself at the altar of commercials, voiceovers and Hollywood studios in order to pay for the passion projects.

He is talking about the casting of George Clooney in the latest Warburtons advert and says that although some actors give what they earn to charity or, like him, spend it on personal projects, the “greats” of the profession would never have crossed that line.

“It’s a bit dodgy to criticise commercials or voiceovers because they are often very ­helpful especially in times of unemployment,” he says. “But I don’t think if you’re a famous, distinguished and great actor it does your reputation any good.

“Someone like (Laurence) Olivier or (John) Gielgud or Ralph Richardson or Marlon Brando, or even Kirk Douglas, they would never do it because what they have created has been so precious to them that they do not want to tarnish it.

“So if actors earn a lot of money doing commercials they don’t mind tarnishing their reputation because their reputation isn’t, if you like, sublime. When I did a film or a ­commercial I could afford to put on something that I believed in so strongly without having to beg some director of one of the major theatres for help.”

Berkoff as a Bond villain with 007 Roger Moore (Image: NC)

On the subject of working with acting greats, Steven has spent lockdown rehearsing a “reimagined age, colour and gender-blind” production of Hamlet, starring his East London neighbour and good friend Sir Ian McKellen.

At the grand old age of 81, McKellen plays Hamlet, a character meant to be no older than 30, with Jenny Seagrove – 18 years his junior – playing his mother, Gertrude, and Alis Wyn Davies, a Welsh actress in her ­twenties, playing Ophelia.

Like McKellen, who defended the casting last week, Steven sees nothing wrong with the “experimental” production, which is due to open at the Theatre Royal Windsor next month.

“It tries to make the point that it’s in your mind,” says Steven, who plays royal adviser Polonius. “If you have the ability to explore and express and define the language and thoughts of Shakespeare, it is better to hear it from an older person than having it mushed up by a younger person merely because he looks young.

“So it is a radical thing to do, and I think of course McKellen does it very well with his immense knowledge of Shakespeare and a phenomenal voice, and sometimes if you criss-cross all different types and genders, it can create something quite magical.”

The cast lived in a Covid bubble together in Windsor for the duration of rehearsals – much like the Queen and the late Duke of Edinburgh.

At the mention of the monarch, Steven becomes very impassioned about the future of the Royal Family and their role in society.

“They are very entertaining, very charming. They have to create motivations for existence. They don’t have a career and so they support. I think they serve a purpose, they can be a great asset,” he says – before adding somewhat tongue-in-cheek, “but I think the Queen could give Buckingham Palace, with its hundreds of rooms, as a ­sanctuary for the homeless, maybe for a few weeks. In lockdown I saw people sleeping rough on the streets in London and I was very unhappy about it and I am sure the Queen would love to do that because she is a generous person.”

Would he accept a knighthood if he were offered one?

“I’d accept it for my wife,” says Steven – even though he is not married to his long-term partner, Clara Fischer, a German classical pianist.

He has been married, twice, and has two grown-up daughters, one from each marriage. “She’d like to go to the palace,” he adds laughing. The couple live in a large open-plan apartment in Limehouse, overlooking the Thames, a stone’s throw from the backstreets of Stepney where Steven was born into a Jewish immigrant family from Romania.

“At the end of the last century, people were suspicious of the immigrants that were pouring in. My family was called Berkowitz so my father changed our name to Berks, which is not such a pretty name.

“So I thought I’d add a little bit of the old world connection with my past and I changed it to Berkoff,” he says.

He is returning to the theme of anti-semitism and xenophobia in another current project, a film about the so-called Battle of Cable Street. It took place in Steven’s old neighbourhood in 1936 when the police, sent to protect a march by Oswald Mosley’s Fascists, were met with Jewish and socialist demonstrators.

Steven believes the lack of diversity in drama is a result of the British class system (Image: Getty )

Steven was driven to make the film by a desire to explore Britain’s rich and, in his view, untapped sources of historical material.

“We seem to have no desire to explore these stories,” he says. “We do these drippy little adaptations of books, and kids’ books but there’s so much drama in our historical, social and political events that we tend to ignore.”

The lack of diversity in drama – in all its forms – Steven believes is because of the British class system. “These people largely come from the middle and upper classes so they are finding subjects that really relate to themselves, to their own experiences and their own petty problems, and things that are gutsy and dramatic they don’t seem to have any connection with.

“People are mostly interested in psychological subjects these days. We have quite good plays and dramas about human ­relationships but there is nothing that is touching on our history.”

For the director of a film about the power of protest, Steven thinks that the recent ­demonstrations over the beneficiaries of the slave trade had it wrong.

“I don’t think you should keep throwing statues (of slave traders) away, dumping them in rivers.

“You should just add a footnote to the statue saying this person was responsible for and involved in the slave trade during this period of time so that we know them for the good things they did – and also the bad things.”

As well as an historical interest in the story of the Cable Street protests, Steven has a deeply personal connection.

“Our family lived a mile away and my Jewish grandfather and father were there on that day in 1936,” says Steven – and then, laughing, he adds: “Nine months later I was born, so I have a feeling my father was excited by the drama and the desperation and the passion.”