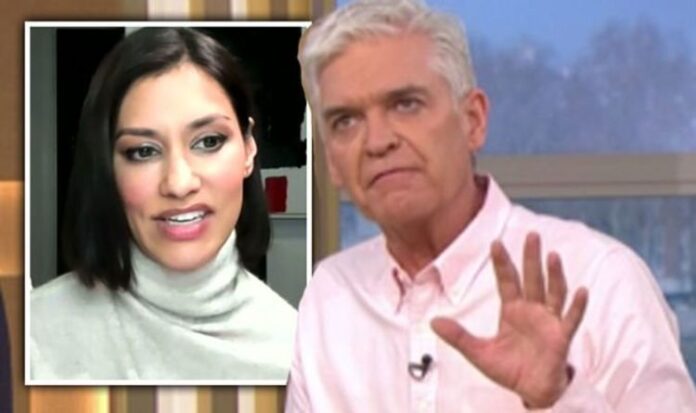 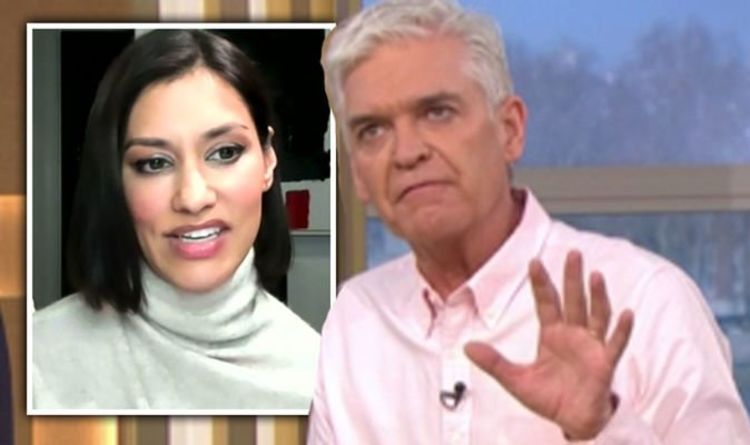 Phillip Schofield, 58, and Holly Willoughby, 40, were joined on the show by Janina as the fallout from Meghan Markle, 39, and Prince Harry’s, 36, interview with Oprah Winfrey, 67, continues to send shockwaves around the world. As the This Morning guest knows the Duchess of Sussex on a more personal level, the presenters wanted to get her candid take on the two-hour discussion, which aired on ITV on Monday evening. However, as she failed to go in-depth about certain matters, Phillip had to question why she was on the programme as they entered into an awkward clash.

After discussing Meghan’s mental health and the claims about racism within the Royal Family, Phillip asked his guest: “Have you spoken to her about coming on the show today?”

“She’s happy (for you) to be talking today?” he added to which Janina replied: “We’re all happy, we’re living in a new era.

“I said I don’t speak for them, I speak for myself,” she continued to which the host went on to say: “I’m not entirely sure what you’re saying because we watched that two-hour documentary.

“For us to look ourselves, for them to look at themselves and think, ‘Where did we go wrong here and how can we put it right?’”

“I don’t know what your role is on coming on today,” Phillip declared as he felt they had learnt nothing new about the Duchess’ experience as a member of the monarchy.

However, before she replied, he did say he understood where she was coming from as he said: “I would expect any friend of mine to come on and do exactly what you’re doing.

“To come on the television and be unbelievably guarded about what you’re saying and practically say nothing.

“So what is your role today?” he asked once more as the tension between the pair seemed to emerge on-screen.

“You are the person in the know,” the host continued, referring to Janina’s personal relationship with Meghan.

Speaking a little more candidly, the guest said: “We watched as a wall was built around her and I can personally say, Meghan was very angry.”

Coming back to the matter of being more reserved, the guest explained: “Your producer has asked you to be here but I told them I can’t speak for them.”

“You know her that’s why you’re on,” Phillip jumped in once more as he tried to set the matter straight before the interview came to an end.

Taking to Twitter, viewers responded to the awkward clash between the pair as one wrote: “@thismorning Give up Phillip, you’re not going to go down in history as getting an exclusive from Meghan’s friend.

“What do you want to know that Meghan hasn’t already told you? Janina is too clever for you #thismorning #Meghan #janinagavankar,” they continued.

A second posted: “#ThisMorning Janina is a lovely person and would have wanted to defend her friend – they have been friends for many years.

“Of course she can’t give away too much she’d be seen as betraying her friend or giving a ‘tell all’. She just wanted to back up her friend.”

‘What are you saying?!’ Phillip Schofield probes Meghan’s friend ‘Why are you here?’