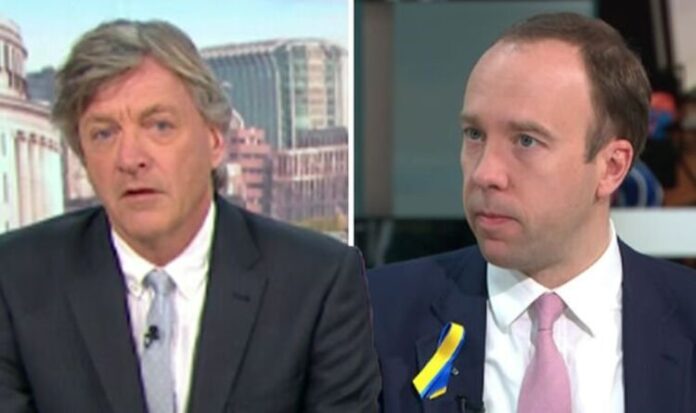 Matt Hancock joined Susanna Reid and Richard Madeley on GMB to discuss the Government’s Home for Ukraine scheme and the former Health Secretary revealed he “warmly welcomed” the proposal and is prepared to house a family of five. However, the interview sparked a backlash as viewers turned their attention to whether Madeley and Reid would be doing the same.

Reid asked the former Health Secretary: “How do you match with a family?”

Explaining how the new scheme works, Hancock said: “There’s two ways to do it.

“The first is if you have a contact with a Ukrainian family and the second is if you’re put in contact through of the international charities.

“In my case, I’ve been working with a British Ukrainian whose family is trying to get out of Ukraine.”

Hancock continued: “In my constituency home I would be able to do this,” before Madeley questioned: “Do you live there as well?”

“Well I live both there and in London so I’m not there all of the time because as an MP you both live in the constituency and I have a flat in London.

“Before I went down this route I checked with the kids and they’re really enthusiastic about it.”

Madeley went on to skewer Hancock on whether his latest move is an effort to rebuild his reputation.

He said: “The elephant in this room in this interview is that we all know there will be cynics watching this and people who will go online and they’ll say the reason you’re doing this is to help rebuild your reputation after you had a bad political fall and you’re in the wilderness and that’s why you’re doing this to improve your standing. What would you say to people who say that?”

Hancock replied: “Actually it’s completely the other way around.

“This came from me doing constituency work which doesn’t often get talked about but all MPs do it and nearly all of them really enjoy it and then I was on BBC Radio Suffolk yesterday morning talking about the scheme and I was asked straight up, ‘You’re encouraging other people to sign-up, are you going to sign-up?’

“I answered the question and your team phoned and asked, ‘Would I come on?’ so I didn’t do this in order to do it in public but if by me coming on and us having this discussion I can encourage other people who are in a position to, to go on the website, sign-up, it’s really easy.”

“If I can encourage one more person to sign-up to this scheme by coming on and talking to you then it would have been worth it,” Hancock concluded.

During the interview, GMB viewers turned their attention to Madeley and Reid.

@TonySpinola2 pointed out: “@GMB you talk about taking in refugees, Richard Madeley has a second home how many is he housing and yoyrself.” (sic)

“@GMB how many people are Suesanna & Richard taking in? If they are so concerned I’m sure they can have few families,” @Ces129tw agreed. (sic).

“@GMB I wonder is suzanna and Richard being part of the sponsor scheme and taking in a refugee… viewers would love to know,” @Ianmide remarked. (sic)

@RDWinter3 probed: “How many are Richard and Susannah taking in them #gmb.”

‘When you going to offer your house?’ Richard Madeley sparks backlash over refugee probe