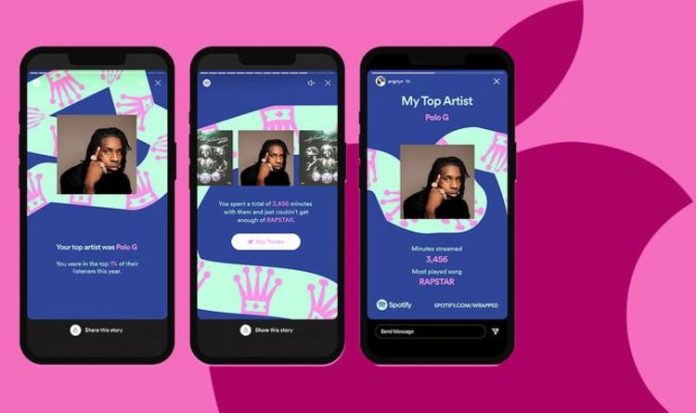 Spotify launched its feverishly-anticipated Wrapped feature earlier this week. The annual event, which allows subscribers to see statistics from the last year – breaking down their most-streamed artists, albums, songs and podcasts, dominates social media for days after it lands. Wrapped 2021 also sees Spotify reveal global trends across its music streaming service, including the most popular artist worldwide from the last 12 months. But what about those who don’t rely on Spotify to stream their favourite artists, playlists and podcasts? Well, the second-most popular option is Apple Music, which does offer subscribers an alternative to Wrapped 2021…. here’s what you need to know.

Apple Music doesn’t have an equivalent to Spotify Wrapped. Instead, its Apple Music Replay feature is available all-year and usually refreshes around February with new statistics about your most-streamed artists, albums, total time spent listing to music in the last year, and a few more.

However, the website that displays these statistics is pretty basic. It’s essentially just a list and looks incredible outdated compared to the slideshow that Spotify puts together for its users, complete with background music (tailored to you, based on your tastes) and lively graphics designed to be shared across your social media. If you want to share your stats from Apple Music, you’ll have to take a few screenshots and post them yourself …not the most intuitive feature.

There are some third-party apps that can offer an almost scientific level of depth in the statistics around your listening habits, favourite artists, time spent listening to a certain album, number of times you’ve skipped a certain song, the list goes on and on… One such option for iPhone owners is Snd.Wave, which is free to download but locks some advanced features behind an in-app purchase.

Another popular feature included as part of the arrival of Wrapped is the custom-built playlist that Spotify puts together each year, with some of your favourite songs since January. This is the rare area where Apple Music does a better job than Spotify.

That’s because Apple Music Replay also subscribers the chance to download a playlist for every year they’ve been subscribed to the service, dating all the way back to 2015. These playlists include the 100 most-played tracks from each year. So far, pretty similar to Spotify. However, Apple Music subscribers can download these playlists at the start of the year and watch as they evolve in real-time. For example, from January onwards, Apple Music subscribers will be able to add the Replay ’22 playlist to their library.

Of course, it’ll only have a few tracks in the ranking to start, but it will slowly build throughout the year, with new entries taking the top spot, old favourite climbing up the charts, and certain artists falling out of favour and disappearing completely before the final order gets locked-in on the final day of the year. Unlike Spotify, which stops collecting data on your listening habits a few weeks before Wrapped kicks off, Apple Music subscribers can get festive tunes in their most-played playlists… as long as they play their favourite Christmas hits on repeat in the final few weeks of the year.

Apple Music Replay is available from the website here right now. If you’re a Spotify subscriber, you can check out your latest Wrapped inside the app now.

With Spotify Wrapped 2021 out now, here’s how Apple Music users can avoid feeling left out