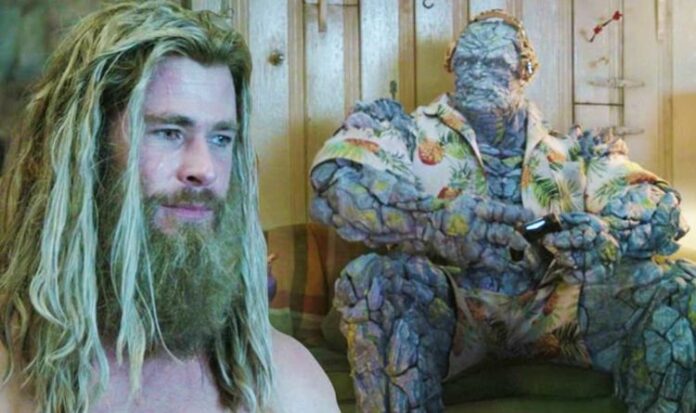 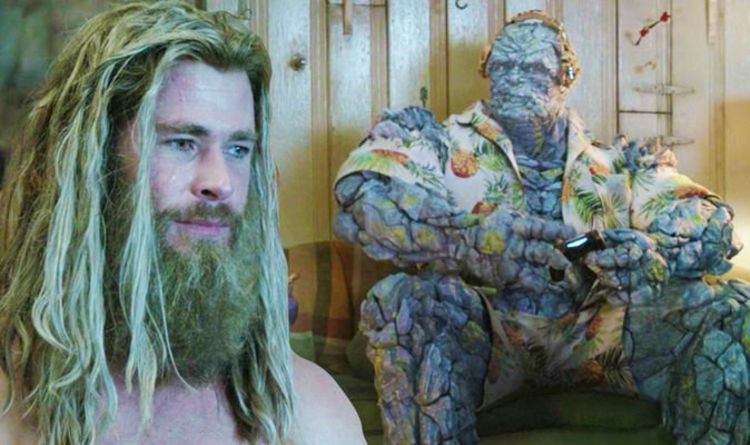 After Thanos (played by Josh Brolin) used the Blip to remove half of all life in the universe in Avengers Infinity War, only a few heroes were left in Avengers Endgame. When The Hulk (Mark Ruffalo) visited Thor (Chris Hemsworth) he found the hero had gained a lot of weight and was spending his time playing Fortnite with fellow alien Korg (Taika Waititi).

During the scene Korg interrupted the Hulk by yelling: “Thor, he’s back. That kid on the TV just called me a d**khead again.”

Thor stared into the camera and declared: “Noobmaster!”

Korg confirmed: “Yeah, Noobmaster69 called me a d**khead,” before Thor launched into a vicious tirade against the young player.

He screamed: “Noobmaster, hey it’s Thor again, you know, the God of Thunder? Listen, buddy, if you don’t log off this game immediately I’m going to fly over to your house, come down to that basement you’re hiding in, rip off your arms and shove them up your butt. Yes that’s right, go cry to your father you little weasel.”

The latest trailer for Disney Plus series The Falcon and the Winter Soldier showed Sam Wilson (Anthony Mackie) looking at an Xbox Series X alongside Aaron (D.C. Pierson) from The Winter Soldier.

After Falcon looked at how the Xbox worked, Aaron revealed: “My gamertag is Noobmaster69… my cousin made it.”

The reveal of Aaron being behind the comments made towards Korg are another example of the Marvel Cinematic Universe being connected in multiple ways.

Showrunner of The Falcon and the Winter Soldier Malcolm Spellman recently revealed another way Avengers Endgame will links to the new series.

Spellman added. “That galvanises and affects everyone on the planet at the same time and creates a nice cohesion and direct lineage to the MCU.”

Falcon star Mackie also recently spoke out about the changes his character has gone through since Avengers Endgame was released.

The 42-year-old said: “The wings have become much more pliable, much more dynamic.

“He’s much more of a winged force. Coming out of Endgame and being blipped out and blipped back in, it seems this time around, he really appreciates being alive.”

Mackie added: “He’s been even more ‘Tony Starkerized’ than before.”

With the expansion of Falcon’s characterisation, rumours have surfaced which tell of an upcoming Captain America 4, with the winged-hero as its focus.

The trailer for Falcon’s upcoming TV series has already shown the hero learning how to use Captain America’s shield. Could he be gearing up to lead the Avengers as the new figurehead of the team?

The Falcon and the Winter Soldier begins Friday on Disney Plus.

Avengers Endgame is available to watch on Disney Plus now.