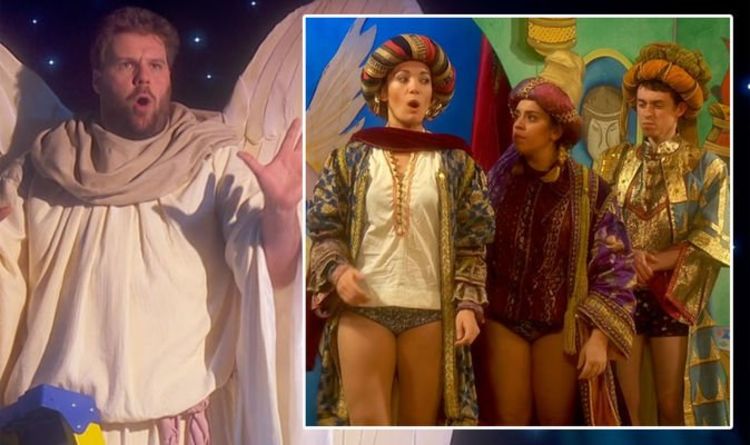 Titled The Nativity, the BBC‘s festive special of The Goes Wrong Show aired at primetime back on December 22 at 7pm. The half-hour Christmas play saw a handful of amateur performers take to the stage to deliver a take on the classic nativity associated with Christmas Day. However, it’s safe to say the tone of the episode didn’t sit well with all viewers, with some branding it an “insult” and “unacceptable” to Christianity.

The BBC’s synopsis for the episode reads: “The Goes Wrong Show team present their take on the nativity story, generously funded by a corporate sponsor after the BBC refused to pay for any more of the Cornley Dramatic Society’s work.

“As ever, all soon descends into chaos: an ingenious pop-up book set soon proves a physical danger to both cast and crew, the angel Gabriel develops a firework obsession, the actors inside a donkey have a terrible falling out that results in unnecessary nudity, and there is much more fire than anyone anticipated. In between, the greatest story ever told is told.”

But the episode had the opposite desired effect with some, with several BBC viewers venting their outrage online.

Taking to Twitter, one disgruntled viewer said: “#bbc what a disgrace I have just watched BBC TV The Goes Wrong Show

“Series 2: 1. The Nativity I am a Christian and found the show totally unacceptable.”

And they weren’t alone as a second echoed: “The Goes Wrong Show: The Nativity @bbc canned laughter, not funny, so offensive to millions of Christians across London.”

“The Goes Wrong Show tonight in BBC 1 – appalling and an insult to the Christian religion,” weighed in a third.

“However, we are always very conscious of how jokes might resonate with those with direct experience of the subjects we cover, and we never set out to mock or undermine their beliefs and experiences.”

Despite some of the criticism from viewers, there was still a number who enjoyed the festive tongue-in-cheek comedy.

One viewer added to the debate: “Have just caught up with the #GoesWrongShow nativity.. absolutely brilliant!! Can’t wait until we can see the amazing @mischiefcomedy live again!”