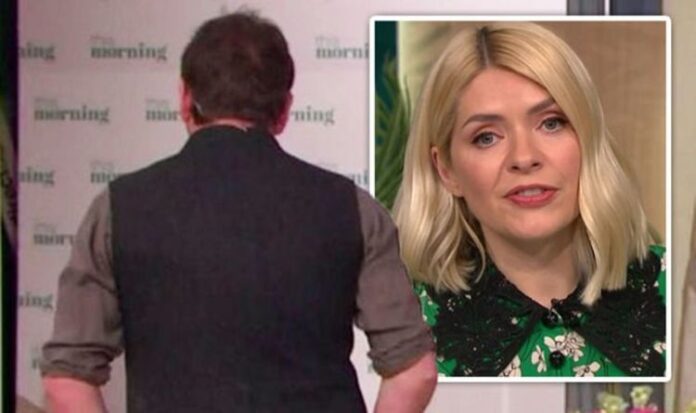 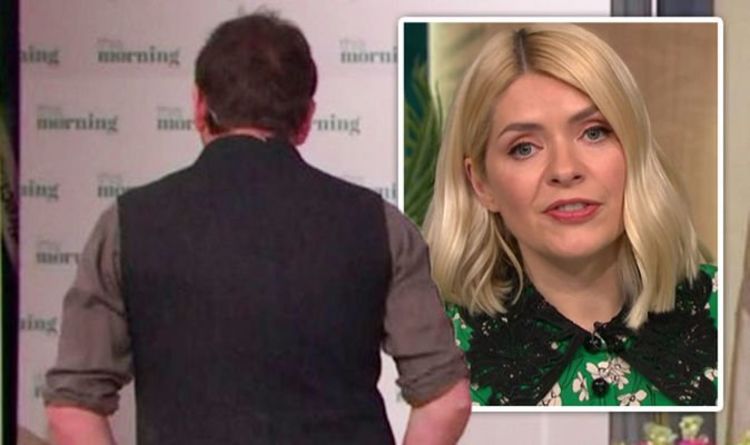 James, 48, joined Holly Willoughby, 40, and Phillip Schofield, 58, on This Morning to whip them up a number of delicious dishes. As is routine, the trio usually picks fun at each other and this often leads to rather hilarious moments on the ITV show. However, it seems the chef was less than impressed with a comment the mother-of-three made about it him when the programme returned to screens after an advertisement break.

With the chef getting set to make some pork crackling, Holly decided to tell viewers what James was going to make preparing.

In doing so, she made a joke about his “meat”, which left the culinary genius shaking his head as he cringed at the joke.

Going one step further, the kitchen wizard then headed towards the doors of the studio and make a swift exit from the set.

The hosts were both left in hysterics and desperately tried to compose themselves after watching their guest walk off.

READ MORE: James Martin walks off set after co-star swipe ‘Don’t have to be here’

Taking to Twitter, viewers were more interested in how much butter the chef was putting into his dishes, with one writing: “Do you need any butter for this recipe James?”

“Never have I been so glad to see James Martin and his mound of butter,” another avid viewer posted on the social media platform.

Whilst a third fan jokingly remarked: “James is a great advert for his all butter diet any way #ThisMorning.”

A fourth shared: “Where the f**k is James Martin and the EU butter mountain when you need them, eh?! #ThisMorning.”

James continued: “Martin Frizell, who’s the boss of This Morning, phoned me up the year after and said, ‘We want you back,’ and I said, ‘Not a b****y chance.’

“That’s the toughest job in TV. No rehearsal, I didn’t know what was going on and the first subject was about a six foot woman goth with a crow and a Great Dane.

“The following conversation was about some women’s issues. I thought, ‘What am I doing here?!’,” he told Platinum Magazine.