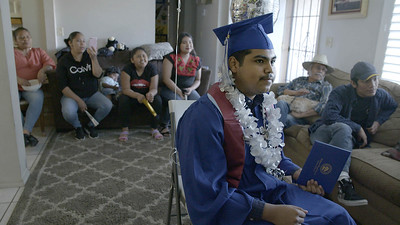 True Hollywood Talk’s team is accredited media for the Sundance 2021 Film Festival, which has gone virtual for the first-time. Here’s our coverage on what we believe to be the most influential and socially impactful indie films that will soon make their way to streaming platforms as COVID-19 continues to linger.

‘Homeroom’ traces the journey that Oakland High School’s class of 2020 faces during a period of horrific social unrest, ranging from the brutal murders of George Floyd and Breonna Taylor, to COVID-19 and the fall of former U.S. President Donald Trump. Efforts to eliminate the school district’s police force unfold against the nationwide cry for systemic change.

“Race doesn’t really exist for you because it has never been a barrier. Black folks don’t have that choice.”

“Let’s stop pushing our Black youth to the side!” Latino high schooler Denilson Garibo exhorts the crowd, leading them in a call and response: “Black lives—Matter! Black futures—Matter! Black graduates—Matter! Black children—Matter!” Garibo’s continuous leadership and passion for the district he represents as Student Director should send chills up and down your spine. It takes courage and true humility to stand up against the systemic racism and injustice those sitting on school boards inherently possess, while claiming to have “the best interests of its students” at heart.

Nick’s documentary captures the resilient and defiant energy of this senior class, with three main questions that have yet to be resolved as a nation:

#1 – Why Are School-Board Funded Programs “Cut” Without the Opinion of Those Actually Affected By These Programs…Students?

Seriously, though. How can school boards come to an agreement and decision with respect to the continued viability of any school-funded program, designed to “help” its students, without actually consulting with students, or a leadership board? We see it everywhere.

We have “class presidents” and “directors of student leadership” positions, but when it comes down to it, often, these are just futile attempts at making it appear as if students have a voice in the future of their education— a strong case Garibo and Mika Smith-Dahl, students representatives on the Board of Education for the Oakland Unified School District make, several times before the Board, along with other arguments responding to OUSD’s response to a year full of teacher strikes, possible school closures, and budget shortages.

#2 – How Can Marginalized Voices and BIPOC Sitting On the School Board, Sit Idle and Almighty?

If you haven’t yet gotten your hands on Emmanuel Acho’s memoir, “Uncomfortable Conversations with a Black Man,” you need to. As far as I’m concerned, this should be a required reading in every school throughout the United States.

In Chapter 3 of the novel, Acho explores the concept of “White Privilege” and why “white” Americans have a hard time understanding it. He presents “the false start” metaphor:

“Say you and I are in a race and the starting line official held [you] back for the first two hundred meters, giving you a two-hundred-meter head start. If that were to happen, the only way to level out that race would be to either stop you from running or put [you] on a bike to catch up to you. This is white privilege in a nutshell.”

He then presents the following questions many people have pondered:

The short answer, according to Acho, is that white privilege is about the word white, not rich. “It’s having advantage built into your life. It’s not saying your life hasn’t been hard; it’s saying your skin color hasn’t contributed to the difficulty in your life.”

This privilege, as the chapter continues, is the power of feeling “normal”:

As far as we’re concerned, Garibo and Smith-Dahl are the heroes of our education system across the globe. They force the Board to look at the unjust system they have helped create, facilitate, and poisonously implemented throughout the District.

#3 – Students Across the Globe Are Suffering PTSD from Generational Trauma

Today, students everywhere have come to the harsh realization that law enforcement’s involvement in the school system has been implemented not as an “educational tool,” but as a “weapon” to see to it that students are silenced/restricted enough to not “speak out.”

As we witness students watching from their smartphones, live-news coverage of former U.S. President Trump’s first impeachment, back in the beginning of 2020, they very quickly make the connection that Trump loyalists and extremists continue to deny:

That the brutal murders of Ahmaud Arbery in Georgia, Breonna Taylor in Kentucky, and George Floyd in Minneapolis, affect their very livelihood and status in society as Black and Brown youth. This serves as the blood keeping the student’s local campaign alive, so as to defund local law enforcement and remove them from the campus, as they see police officers as a “weapon” that automatically “assumes” that these students could one day become a “threat” to the local community.

Systemic racism never disappeared back with the Civil Rights Act and the Thirteenth Amendment to the U.S. Constitution.

Indeed, students across the globe are suffering from a generational trauma of many multitudes, beginning with a hostile U.S. President who believed that individuals of black and brown skin, could for no other reason but for their skin color, serve as a threat to national security, along with the aforementioned murders, and a global pandemic that has forced the closure of educational institutions everywhere.

“There are a lot of students who have PTSD when it comes to police officers because they have had traumatic experience,” one high schooler tells members of the force who turn out for a Q&A with students. “There are police officers always, like, patrolling around communities that they live in, they see people that look like them get arrested, family members get arrested, like, unjustfully…And then, like, school’s supposed to be a safe place and then you see them there as well.”

Fantastic Fest 2021 Returns for the Year’s Biggest Celebration of Genre...