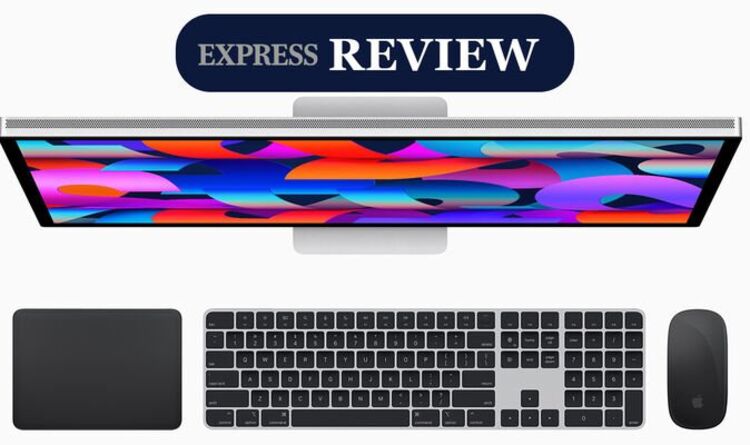 If you’ve decided to treat yourself to the blisteringly quick Mac Studio, or have a MacBook and want a bigger display to spruce-up your home office, then you might be looking for a monitor to plug into. Right on cue, Apple has unveiled its brand-new Studio Display. This 27-inch external screen has been designed to sit perfectly alongside your Mac and offers a 5K resolution and Apple’s True Tone technology, which adjusts the colour temperature to match the room around you.

We’ve been testing both the all-new Mac Studio – read our in-depth review here – and the Studio Display and we’ve been left mightily impressed. This new screen, which costs £1,499, packs a very impressive punch with its almost bezel-free design meaning you get a more immersive and uninterrupted experience. This design certainly beats the chunky chin that has long featured on the popular iMac.

Colours pop from this panel with everything looking bright, sharp and packed with glorious detail.

As we mentioned earlier, things are boosted further by Apple’s 5K Retina technology and, for some extra dazzle, it supports a staggering one billion colours, plus you get up to 600 nits of brightness. That’s brighter than you’ll with the latest MacBook Pro, which tops-out at 500 nits.

The new Studio Display is not just about that screen as there are plenty of other tasty treats tucked inside. To help improve those endless zoom calls, Apple has borrowed the 12-megapixel front-facing camera found in its iPad lineup for the Studio Display and the screen even has the powerful A13 Bionic chipset tucked inside to reduce background noise during calls and enable the clever Centre Stage feature.

This update allows the camera to follow you around the room when making video calls, so you always stay in shot. We’ve been using Center Stage on other Apple products for a while and it works really well – it even knows when someone else walks into the shot and seamlessly switches to a wider angle view so everyone can be seen.

Along with boosting the camera, the A13 Bionic also makes this screen sound better as it brings technology such as surround sound, support for Spatial Audio and Dolby Atmos to the six speakers tucked inside the aluminium chassis.

This makes it appear as if audio is hitting your ears from all directions and it works incredibly well. In fact, if you thought the speakers on the iMac were good – wait until you hear what the Studio Display is capable of.

Other features worth a mention include improved Studio-Quality Microphones and there are four USB-C ports on the back including one that can fast charge your iPhone and even refill a MacBook.

As standard, it comes with a stand that tilts but you can upgrade this to an option with both tilt and height adjustment – that’s an extra £400. There’s also a VESA mount option should you want to stick it to the wall.

Apple will also add its nano-texture glass to the Studio Display. First introduced on Pro Display XDR, which costs £4,599, this texture scatters light to minimise glare when the screen is in direct sunlight. If that sounds useful be prepared for some bill shock as adding this tech costs an additional £350.

If you work all-day in a brightly lit room, the nano-texture coating does work well. However, £350 is a costly extra – that’s the same cost as a new wireless keyboard and Magic Mouse to use with your setup – so we’d urge you to triple-check that you need it. After all, turning your monitor away from a window could save you a chunk of change.

So that’s the Studio Display. It’s all very impressive …but then again, it should be given the £1,499 starting price. And that big cost isn’t our only niggle as, just like the Mac Studio, it ships with an ugly black power cable and there’s no way to use it without a PC being attached.

Rivals like Samsung now produce external displays that are fully internet-connected meaning they can transform into a smart TV once the day’s work is done. The Studio Display is so good it feels like it would be perfect for a quick Netflix binge or night of Apple TV+ but, despite it featuring that powerful A13 Bionic chip – more powerful than the chipset that powers the Apple TV 4K set-top box, it can’t do anything without a Mac being plugged into the back of it. That means, if you plan to use the Studio Display with a MacBook in your setup, with the laptop gone, you’ll be left with a very expensive black mirror.

If you’re looking for a stunning external display to sit alongside your new Mac Studio or want a monitor to boost your MacBook or Mac Mini, then the Studio Display is a solid option.

It looks superb on your desk, offers stunning visuals in crisp 5K, and sounds as good as your local cinema.

The ports on the back are a useful addition, especially as one offers ludicrous fast-charging, and the new video call camera and microphone will help make you look like a Hollywood superstar on your next Zoom call. The addition of the A13 Bionic means these features will be available even if you’re using an older MacBook that doesn’t natively support these features too, which is a nice touch.

Yes, the Studio Display is very expensive and it’s a shame Apple didn’t kit-out this gorgeous panel with its own Wi-Fi connection so that it could double-up a Smart TV, but for what it is, this is a great display that makes your content sing.

Studio Display review: If you can stomach the price, this screen is a dream

Alexa is getting smarter, as Amazon reveals new tricks to try...