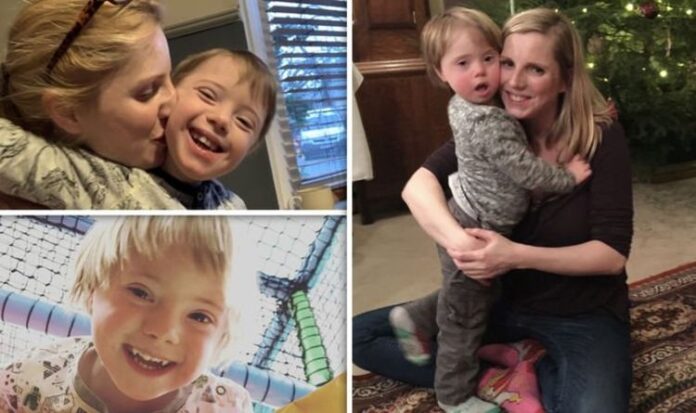 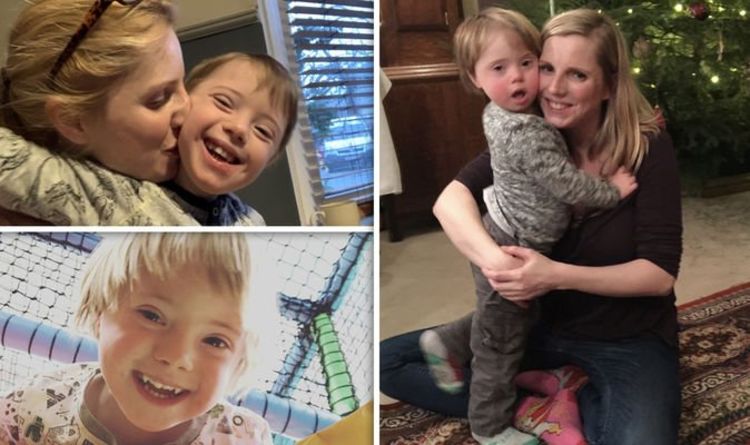 Wendy Puckrin, from Harrogate, was 38-years-old when she fell pregnant with son Elijah. She was aware the chance of having a baby with Down’s syndrome increases as you get older, but following the breakdown of a relationship and the need for no additional stress in her life, she decided against a screening test to find out the chance of her baby having the condition.

“For me, ignorance was bliss,” she said.

Wendy, now 46, found out Elijah, now 7, had Down’s syndrome after he was born.

Remembering the birth, she explained: “My sister was holding him and mentioned to the midwives he had gone a funny colour.

“They swooped in to examine him, he was whisked off to special care and they muttered something about Down Syndrome. That’s the first I heard of it.

“I went to bed around 4am, my head was in a whirl of thoughts, not all of them good.

“The next day we went through to special care to visit him. He looked so helpless in his incubator, he was on oxygen and feeding tubes and his oxygen levels were being measured constantly.

“The nurses came to speak to me, again they mentioned Down Syndrome but said they would have to wait for test results.

“A couple of days later I had a sit-down chat with a consultant who told me tests confirmed he had Trisomy 21 [the most common type of Down syndrome].”

READ MORE: How to live longer: Sex may reduce heart disease risk – how often you should have it

If you’re pregnant you’ll be offered a screening test to find out your chance of having a baby with Down’s syndrome, but this isn’t compulsory.

Last year, statistics released by the Department of Health showed a 42 percent increase in abortions for Down syndrome since 2008.

While there was nothing terrible about the way Wendy was delivered the news, she remembers being handed leaflets, one of which was on adoption, and she says many expectant mums who are given a positive result for Down syndrome are told it’s “bad news”.

“I had my own preconceptions, and they weren’t good,” revealed Wendy.

“I had visions of adults with Down syndrome never able to live independent lives, being unemployable and a burden on their family.

“I could not have been further from the truth.”

“The language around Down syndrome is negative,” continued Wendy. “Some universities teach midwives to deliver a diagnosis by saying ‘it’s bad news’, or you can be in a ‘high risk’ category.

“Risk does not portray good; you would not say to someone that they have a high risk of winning the lottery.

“The leaflet on adoption slipped in with all your information, the money the NHS spends on developing genetics tests, the high termination rate after a positive diagnosis plus the ability to request late termination.

“I see the term ‘suffering from down syndrome’ often. Let’s make this abundantly clear, the only thing Elijah suffers from is ignorance from those who believe that Down Syndrome is some sort of curse.”

Wendy says her life has changed 100 percent for the better, with Elijah now at mainstream school.

“He is obsessed with numbers and counts everything, constantly!” she said.

“He is in a small school and all the children adore him. Especially the older ones, he’s still small for his age so they love playing mother to him and the older boys just love his playful nature.

“Sometimes the children ask me questions about his condition, which I positively encourage, I did a talk at the school so they could learn a little about Down syndrome and ask whatever they wanted.

“Yes, he can be a pain in the bum and sometimes a total nightmare, can’t any child? We have our challenges, I’m a single parent so that is to be expected. But the joy that this tiny person brings to my life, and all those around him, surpasses any negatives or challenges that we may encounter. He is my teacher, my inspiration and my guiding star. He is a human being.”

Wendy is now part of a campaign to change the negative views surrounding Down syndrome.

“People with Down syndrome can happily live independent lives, graduate from college, get married, have their own families,” she said.

“We have actors, actresses, MBE’s, councillors, business owners, all with DS.

“The problem I have is when archaic information is given at the time of diagnosis from medical professionals and the media generally have a negative view on Down syndrome.

“If you are given nothing but a gloomy account of what a child with DS will bring you, how can you make an informed choice?”

Wendy started a Facebook page for Elijah when he was around six months old in a bid to kickstart changing perceptions, then went on to join forces with Wouldn’t Change A Thing (WCAT) – a much bigger platform with almost 50,000 followers.

Wouldn’t Change A Thing was started in June 2018 by parents of children with Down syndrome, and their Christmas campaign was launched early this year to coincide with the airing of controversial storyline on Emmerdale where the characters decide to terminate a baby upon releasing it will be born with Down syndrome.

Jamie McCallum, WCAT Chairman, said “Our campaigns are intended to challenge the negative outdated misconceptions about Down syndrome among the general public by showing insights into the true lives experienced by families today. We know that these negative misconceptions will be a key issue for the characters in this storyline, so this seemed like an appropriate area to shine a light on.”

“Emmerdale ignored a petition signed by 30k people pleading for them to change the storyline, they could have used it to create positivity and awareness, they chose ‘entertainment’ instead,” added Wendy.

Laura Shaw, series producer for Emmerdale, issued a statement in November saying the storyline had been thoroughly researched in collaboration with Antenatal Results and Choices (ARC), medical professionals and people with lived experience.

“We’re confident that what we’ve produced has been done in a really balanced and sensitive way,” she said. “We haven’t gone into this blindly, we’ve spoken to as many people as we possibly can. We’ve got the research, this is based on real life, and I think people will see that.

“You’re going to feel uncomfortable at times watching it, but I hope that people will then, as they watch it, understand why we’ve done it.”

She said she knew it would be “contentious” but added that was partly what made it “such an important story to tell”.

“I’m sure we’ll get some mixed reactions, I’m well aware that it’s a hugely emotive subject. But I do honestly think that once everyone has watched the episodes play out, they’re going to feel huge sympathy for what an impossible and difficult choice these couples face, and an understanding,” she added.

“And what you’ll see through Jai and Laurel’s story is how that decision goes on to affect their lives for years to come.”

The WCAT storyline centres around a new song – ‘What Do You See’ – an original track written by Tom Kerr, a new grandfather with no connection to Down syndrome, who saw a Facebook photograph of his new grandchild alongside a girl with Down syndrome, Rosie, after the March lockdown this year.

The single will be available across all music download platforms. What Do You See? By Kennedy and Kerr.

Wendy continued: “My son is amazing, he has a zest for life that I have never seen in any other human, he has a determination that I could only dream of, he is happy, he is healthy and he is loved beyond words. These are the bits that the medical world doesn’t see, that the media don’t want to see.

“Elijah – you are my world, and without you in it, I would quite simply cease to exist.”

Doctor issues warning about staying in the shower for too long...

Covid vaccine: The six side effects you might encounter after having...