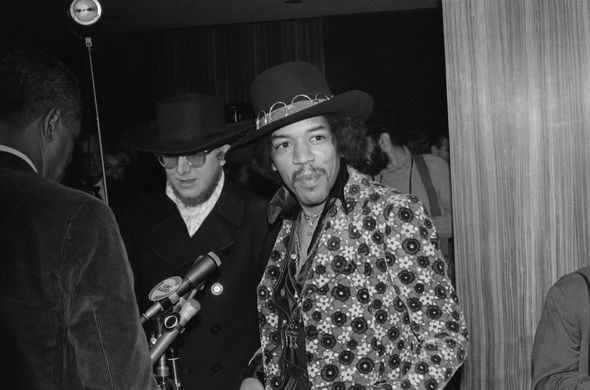 How Jimi Hendrix conquered London and then the world (Image: Getty)

From then on, their US tours regularly brought the likes of Muddy Waters, Ike and Tina Turner and BB King out of the blacks-only Chitlin’ Circuit as guest artistes. Almost as crucial to the Stones’ evolution were the young women who took their principal members to a higher social and cultural level than their modest provincial backgrounds promised.

For Keith Richards, it was the well-connected Linda Keith, a beautiful – and strong-minded – model. Despite a ban on wives or girlfriends, when the Stones toured America for a fifth time in May 1966, Linda was defiantly staying at her own expense with a friend in New York.

One night, they decided to check out a recently-opened place, the Cheetah Club at 53rd and Broadway. The house band that night was Curtis Knight and the Squires with Jimi Hendrix on lead guitar.

Since arriving virtually penniless in New York in January 1964 after an empty promise of work, the young guitarist had been living hand to mouth. “His clothes were terrible,” Linda recalls. “He had a kind of frilly Cuban shirt, bell-bottom trousers that were too short, cheap boots, hair that was obviously curled with rollers. But his playing was sensational.”

When he came off stage, Linda told him she’d loved his performance and invited him to her table. One of the first questions she asked was why he didn’t sing as well as play guitar? The answer was he felt self-conscious because his voice lacked the soulful rasp of an Otis Redding or Wilson Pickett. Linda recalls: “I told him, ‘Listen to [Bob] Dylan, that should be proof you don’t need to sing in the way everyone else does’.”

At the end of a chaste night, Linda promised to use her connections with the Stones and other industry figures to help Jimi. They spent most of that summer hanging out while Linda waited for Keith Richards to come off the road, though her efforts to interest the band’s manager Andrew Oldham and US record exec Seymour Stein in Jimi came to nothing.

One night, with the camaraderie of British bands abroad, the Stones and Animals, who were performing a farewell tour, were out clubbing together.

Chas Chandler, the Animals’ bass player, told Linda he wanted to move into management: “So I piped up, ‘I’ve got just the person for you’.”

When Jimi auditioned for him, Chandler marvelled in his broad Tyneside accent: “This is ree-dic-lous. Why hasna’ anyone signed this guy up?” He moved swiftly to remedy the situation.

It was meant to be a low-key introduction to London. Having arrived three days earlier from New York with an overnight bag and $40 from a friend, Jimi Hendrix played at the Scotch of St James club in Mason’s Yard, Mayfair, on September 27, 1966. He had no work permit and the 23-year-old guitarist had been held up for two hours at Heathrow before being granted a seven-day visitor’s visa prohibiting any employment during that time. Since Jimi could not be launched with any kind of formal concert, he was to be covertly slipped into circulation via the clubs frequented by London’s leading pop names, playing solo or sitting in with their house bands for free. Thus, if challenged by the authorities, he could argue that jamming was not work but leisure.

Chas Chandler had borrowed a guitar for his protege and persuaded Welshman Rod Harrod, who managed the Scotch nightclub, to let his star appear with the house band. “Chas had this wild-looking character with him who he’d just brought from New York and said was a brilliant guitarist,” Harrod recalls. “I’d never heard of him or seen him play, so I just said, ‘I’ll take your word for it, Chas’.”

Like all the ‘in’ clubs, the Scotch was subterranean, tiny and pitch-black, but harboured more alabaster pop star faces per square yard of darkness than any of its rivals. On its opening night earlier that summer, Harrod had counted “three Beatles, three Rolling Stones, two Who and two Kinks”.

But on the Monday night of Jimi’s debut, few such luminaries were in evidence, although Paul McCartney would later claim to have been there incognito.

Jimi went onstage with the house band, plugging his borrowed guitar into their amp. In observance of his visa, he was not being paid and played just four numbers before Chandler dragged him off the stage.

Alas for Chandler’s hopes of a low-key entry into London clubland, the night descended into violence and recrimination after Linda Keith joined the party, which now included 20-year-old Kathy Etchingham. The latter had run away from home in Derby aged 16 before enjoying brief affairs with the Who’s Keith Moon and Brian Jones of the Stones and being absorbed into Swinging London where she worked as a club DJ.

“After Jimi came off stage, I found myself being gradually edged out,” Linda recalls. “Then he put his arm around Kathy and smiled across at me on my stool outside the charmed circle. I just said, ‘**** off, Jimi’ and it started a huge fight between the women.

Terrified the fracas would get into the papers and reveal Jimi to be working unlawfully, Chandler hustled him upstairs to the ground-floor lounge area as Linda was ejected. “He abandoned me at the very moment and at the only time I ever needed him,” Linda recalled.

When Jimi left the club later with Kathy, his British adventure almost came to a premature end. Unaware UK motorists drove on the left, he did not see a black London taxi with its gold-lit ‘For Hire’ sign bearing down on him. “I managed to grab his jacket and pull him out of its way just in time,” Kathy recalls.

The next morning, Linda returned to the Hyde Park Towers hotel in Bayswater, where Jimi was staying. Letting herself into the room she had booked for her own hoped-for night of passion, she found Jimi in bed with Kathy. Kathy would later describe the two of them cowering under the bedclothes while a mini-skirted tornado went through the room gathering up her things.

While Jimi’s outward cheerful adaptability had masked a fear that the adventure might come to a premature end, there was so much more to recount, so he placed a reverse charge phone call to Seattle and his father Al Hendrix in the presence of Kathy Etchingham, by now his girlfriend.

In Kathy’s recollection, Al wouldn’t believe Jimi was in England and he passed her the phone so that her accent would prove it. Once persuaded, all he said was, “You tell my boy to write me. I ain’t paying for no collect calls.” The phone went dead and Jimi’s face fell.

Yes despite such personal disappointments, success came for the band almost immediately with a string of hits and three albums instantly recognised as classics. As if in reprisal for the British Invasion of the US, Jimi was a one-man American counter attack.

At the same time, he settled happily into his adopted culture, embracing such British institutions as warm beer, fish and chips, Winnie-the-Pooh and Coronation Street. Kathy described playing Monopoly and Scrabble with Jimi, and with the Scalextric racing car set he bought as he came into money in compensation for the toys he’d never had as a child.

From London he cut a swathe through Europe, then returned to America to steal the show with his burning guitar at the first great pop festival, Monterey, in 1967. The next year, the country torn apart by race riots and brutal official reprisals, he went on the road there as a black man leading two white ones – a move as courageous as any by the Civil Rights movement.

In 1969, the Woodstock festival was galvanised by his solo instrumental performance of The Star-Spangled Banner, implicitly protesting against the havoc being wrought inVietnam by the US military in which he’d once proudly served.

Yet this blazing success came to a tragic end just as new chapters were opening up, and in the swinging capital that had launched it, after increasing use of drugs and alcohol and, finally, on September 18, 1970, an overdose of barbiturates in a squalid west London hotel a stone’s throw from where he stayed when he arrived four years earlier. He was 27.

“The Jimi Hendrix Experience is over,” America’s ABC news announced. “The acid rock musician died today in a London hospital, apparently from an overdose of drugs.”

Two days later, an inquest opened at Westminster Coroner’s Court. It had an air of being little more than a formality yet coroner Gavin Thurston recorded an open verdict – the death was suspicious but no firm conclusion could be reached.

Jimi was buried in Seattle.

He died intestate which meant everything went to the father who’d never shown his music an ounce of understanding or respect.

PS Now September 2020 WARNING ahead of PS Plus free games...