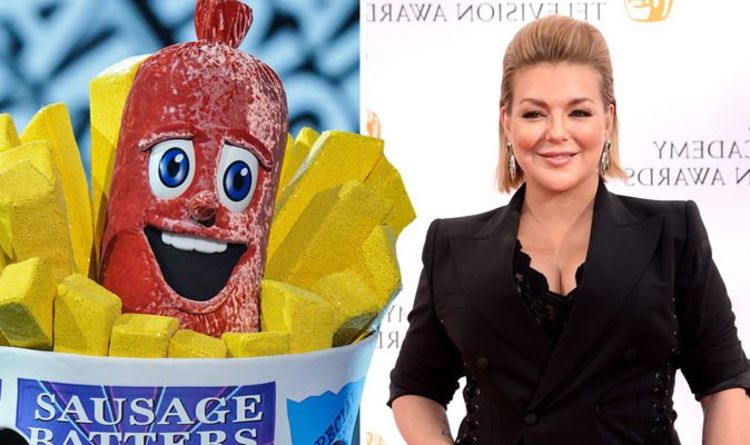 Sausage was first to take to the stage on tonight’s The Masked Singer and her performances left fans utterly confused. Many were adamant their guess of Stacey Soloman was correct, but a new name was thrown into the mix after a series of clues were given, followed by the two truths and a lie. With the judges convinced Sheridan Smith was hiding behind the wacky costume, here are the reasons why it could be the singer and actress starring as Sausage.

“Let me catch up on my last performance,” Sausage began. “Wow, what a great response, I’m overwhelmed, I’m just a regular old sausage!

“The panel tried really hard to get the scoop on who I am, this sausages has certainly put the panel in a pickle and I’m relishing every moment.

“The thing is with sausages – I can be gourmet or no nonsense, but I’m definitely a bit of the latter,” she continued.

Sausage was then seen back on a pebbled beach and one of the judges commented: “Someone from Essex?”

“I don’t mind speaking my mind and following my own path,” Sausage explained. “Ultimately, I love a bit of the simply life.”

Sausage then had a pink toolbox in her hand and placed it down on a bench which also had two pint glasses and a pack of crisps on it.

“I always have a bag of potato snacks to hand,” she added. “And I’m equally happy with a night in at home.

A hammer then appeared and she said how she was a fan of DIY.

Sheridan came to prominence after playing a variety of characters on sitcoms such as The Royle Family, Two Pints of Lager and a Packet of Crisps, Gavin & Stacey, and Benidorm.

As for her accolades on stage, she appeared in Legally Blonde the musical in 2009 and extended her run until 2011.

As for the Essex accent, Sheridan was born in Epworth, Doncaster, but The Masked Singer has been known to alter people’s accents.

The actress is also known for wanting to keep a quiet, private life, especially after she suffered a breakdown.

Those watching at home also thought Sausage was Sheridan.

“Hot dogs gotta be Sheridan Smith right? Two pints of lager and a packet of crisps? Presenter? #TheMaskedSinger,” another suggested

Celebrities Are All Over Natural Skin Lighteners, But One Brand Has...