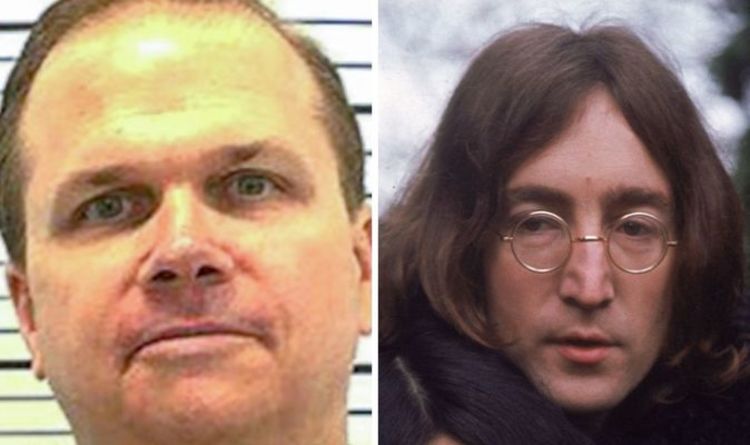 John Lennon killer: Who is Mark David Chapman? Where is he now?

John Lennon was brutally shot by Mark David Chapman on December 8, 1980. He and his wife Yoko Ono were just heading home after recording sessions in New York when tragedy struck. Now, Chapman is in prison for his horrendous crimes.

The man jailed for the murder of John Lennon was Mark David Chapman, who is believed to have been a crazed fan hellbent on killing a public figure.

On December 8, 1980, Lennon autographed a copy of the album for Chapman, before leaving where they lived at The Dakota in Manhattan for a recording session at the Record Plant, then in New York City.

After the session, Lennon and Ono returned to their apartment in Manhattan in a limo at just before 11pm, and walked through the archway of their building.

Sadly, it was then Chapman shot Lennon in the back at close range.

READ MORE: Tenet ending explained: What did THAT ending mean?

He was rushed to the Roosevelt Hospital in New York City but was pronounced dead on arrival at 11pm.

Lennon is likely to have died in the police cruiser en route to the hospital, though it is uncertain whether he was shot dead instantaneously.

Chapman has been understood to have been furious at Lennon for his public statements, such as being “more popular than Jesus,” despite being a Beatles fan.

He is also believed to have contemplated killing other public figures, such as Ronald Reagan and Elizabeth Taylor, but he had no prior convictions before the shooting.

After hitting Lennon four times in the back, despite shooting five times, he remained at the scene reading J.D. Salinger’s novel The Catcher in the Rye, which he is reported to have become obsessed by in the years leading up to the murder.

He was arrested at the scene and was sentenced to 20 years to life in prison with mental health treatment.

Chapman has since been refused parole many times, something which Lennon’s widow, Yoko Ono, has fought to ensure.

The most recent of these attempts was today, when he was denied parole for the 11th time, and will remain behind bars for at least another two years.

This means, so far, his sentence will be more than 40 years in prison.

Crowds gathered at Roosevelt Hospital and in front of the Dakota, where Lennon was shot to commemorate his death, though Lennon himself had asked not to have a funeral.

Lennon was cremated at the Ferncliff Cemetery in Hartsdale, New York, on December 12 and his ashes were given to his widow Yoko Ono, who requested 10 minutes of silence around the world instead of the funeral.

Ono and her son with Lennon, Sean, were the main beneficiaries of his will.

His other son, Julian, from his first marriage with Cynthia, received little from the will, which is something he has spoken openly about since.

In an interview with The Telegraph in 1998, Julian said: “I don’t think it was necessarily fair, but I’m OK. The last thing I wanted was a court battle because there’s much more money on the estate side than my side.

“A court case could have gone on for five years. The slanderous remarks would have been horrific.

“There would not have been a private life for either Sean or me. I just wanted to resolve it, to get the hell out of there; a chapter in my life finished, over with.”

Despite these sentiments, there was a well-publicised battle from Julian to attempt to gain a further settlement from the John Lennon estate, which was once estimated to be around £220million.

Julian eventually secured a further settlement from the estate in 1996, but the number was never revealed, and the battle saw Julian go up against the main executor of the estate, his stepmother.

In the end, Julian used a great deal of this to buy back some of his father’s possessions, including an Afghan coat worn by John on the cover of the Magical Mystery Tour, and scribbled notes about the song Hey Jude, which is written about him.

At present, Yoko Ono has not commented on the announcement regarding Mark David Chapman’s new appeal being denied.